Petraeus was treated for prostate cancer 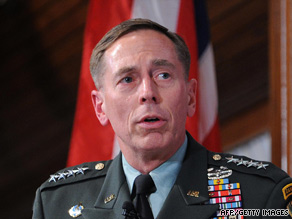 Gen. David Petraeus was diagnosed with prostate cancer in February.

He was diagnosed in February, his office said, and underwent two months of radiation treatment at Walter Reed Army Medical Center in Washington, D.C.

"My cancer was caught very early," Petraeus, 56, said in remarks released by his office. "I've had two PSA tests since completing treatment five months ago, and they've both been very positive. Surgery to remove the prostate was not an option due to plates/screws that were used to repair my pelvis after it was fractured in a parachuting accident."

PSA tests are blood tests performed to screen for prostate-specific antigens -- proteins produced by cells of the prostate. Higher levels of PSAs could signal prostate cancer or benign prostate conditions.

At an appearance Tuesday after news of the treatment was out, Petraeus made only a lighthearted comment about this health.

"With the CNN reports today, they're all just here to see if the guy's still alive or not," said Petraeus, joking about the camera crews recording his speech at the Association of the United States Army meeting in Washington. He did not comment further on his condition.

The treatment had "minimal impact on his work schedule as he was spending 4-5 days a week in Washington, D.C., for various policy reviews and other Pentagon activities at that time," the statement said.

Petraeus made at least one overseas trip during the radiation treatment.

He regarded his illness a personal matter and kept it largely private because it did not interfere with his duties, the statement said.

However, the president, vice president, secretaries of state and defense and the chairman of the Joint Chiefs of Staff were notified of Petraeus' condition, the statement said.

Petraeus leads U.S. Central Command and is the overall head of operations in Iraq and Afghanistan.

All About David Petraeus • Prostate Cancer