WASHINGTON (CNN) -- Top House Democrats on Tuesday slammed insurers who claim that domestic violence is a pre-existing condition that can be used to deny coverage to battered women. 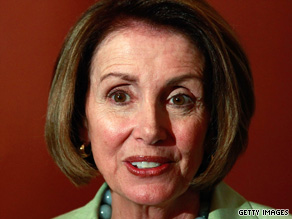 House Speaker Nancy Pelosi was among those targeting the coverage practice.

They pledged to incorporate a ban on the practice in the health care reform legislation winding its way through Congress.

Forty-two states have passed such a prohibition, according to a recent report from the National Women's Law Center. Idaho, Mississippi, North Carolina, North Dakota, Oklahoma, South Carolina, South Dakota, Wyoming and the District of Columbia have not, however.

"Think of this," House Speaker Nancy Pelosi said. "You've survived domestic violence, and now you are discriminated [against] in the insurance market because you have a pre-existing medical condition. Well, that will all be gone."

The ban would be part of a broader prohibition against the use of pre-existing conditions to deny care, a component of all the reform bills now under consideration.

Washington Sen. Patty Murray, a Democrat, told CNN that she heard about the issue several years ago while talking to women who trying to escape abusive relationships.

One of the women "told me that she did not report her domestic violence because her health insurance company would drop her. I [initially] didn't believe" the woman, Murray said.

Murray introduced an amendment banning the practice in 2006 but was unable to get the measure approved.

One Republican opposed to the amendment, North Carolina Sen. Richard Burr, argued that it's "deplorable to deny coverage to victims of domestic violence. However, states should be responsible for regulating insurance markets."

On Tuesday, a spokesman for an association representing health insurance companies backed the proposed change.

"No one should be denied coverage because they are a victim of domestic abuse," said Robert Zirkelbach, spokesman for America's Health Insurance Plans.

It is unclear how many women are now being denied coverage because they are stuck in an abusive relationship. Women's Law Center Vice President Judy Waxman conceded that there are no current examples.

"We do not know the extent to which this practice actually happens," she said. "But our point is, it's the kind of thing insurance companies look to do. ... They will find ways in the current situation to deny people care if they find anything wrong with them."

Some reform advocates say the proposed federal action, though a positive step, does not go far enough.

"We have to go further and take affirmative steps to reach out to battered women who may have been denied coverage to let them know the landscape has changed and there may be insurance options available to them," said Shelley Senterfitt, a representative of the Georgia Coalition Against Domestic Violence.

"We need to fix the damage that's been done," she said.