WASHINGTON (CNN) -- The head of ACORN on Tuesday sharply deplored recent videos showing some of the group's workers advising people how to set up a prostitution business. 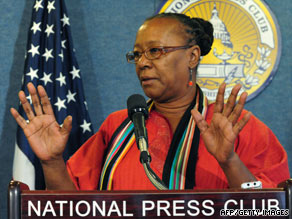 ACORN leader Bertha Lewis defends her group at the National Press Club on Tuesday in Washington.

"It made my stomach turn," Bertha Lewis, chief executive officer of ACORN, told reporters at the National Press Club in Washington. "It just made you sick."

"So yes, I terminated those employees."

At the same time, Lewis defended the community organizing group and punched back at widespread criticism, touting the group's efforts in helping poor people in the areas of housing and voting.

She backed up the group's legal action in Maryland against the makers of one of the videos. Video, shot with a hidden camera, shows conservative activists posing as a pimp and a prostitute. Lewis said that "we want to hold them accountable" for what she said was breaking the law.

Similar videos were made at other ACORN offices.

"It is illegal, as Linda Tripp will tell you, to record someone in the state of Maryland without their permission. Just because we were embarrassed by these highly edited tapes, which don't tell the whole story again, and hopefully that will come out, doesn't mean that these people didn't break the law in order to embarrass and attack the organization," Lewis said.

Lewis was referring to the former White House employee who recorded conversations with White House intern Monica Lewinsky about her sexual encounters with President Clinton, which ultimately led to his impeachment.

ACORN -- which stands for Association of Community Organizations for Reform Now -- was in the headlines during last year's presidential campaign after GOP allegations of falsifying voter registration applicants. Some of its voter registration workers were prosecuted, and some other employees resigned.

But after the recent release of videos, the political criticism grew.

In the videos, some ACORN workers advised the undercover conservative activists how to set up a prostitution business involving underage, foreign girls.

Along with firing employees, ACORN also is conducting an investigation through an independent auditor.

The Justice and Treasury departments are investigating the group, too.

The U.S. Census Bureau has terminated ACORN's involvement in its public outreach program, both chambers of Congress have voted to deny federal funding to the organization, and several states are looking into ACORN operations.

In addition, ACORN suspended tax preparation services it carried out as part of an Internal Revenue Service program. And Bank of America announced it is pulling its funding of an ACORN housing affiliate until it is satisfied that all issues related to the organization have been resolved.

"We were punished for following the law and doing the right thing, and that part of the story was never told," she said. "And so nine months later it finally began to resonate with folks that we had not had one individual who voted fraudulently in the presidential election because of an ACORN registration -- not one Mickey Mouse, not one Donald Duck, not one New York Jet, Giant or any other fraudulent person."

One of the shadows over ACORN is an embezzling incident involving Dale Rathke, the brother of ACORN founder Wade Rathke. Lewis acknowledged that the founder's sibling embezzled nearly $1 million from the group.

She disputed reports that a subpoena from the Louisiana attorney general's office showed that the amount was up to $5 million. Lewis said the claim is "speculation, "completely false" and not based on any documentation. She attributed the contention to two "disgruntled former board members."

Lewis' group works in poor precincts across the country considered Democratic turf. She said e-mails from Karl Rove, when he was Bush's top political adviser, show that ACORN was targeted to stop its voter registration efforts because "we were moving too many minorities to vote" and "changing the power dynamics" in local elections.

Such critics of the group believe "we needed to be stopped," Lewis said.

"I do think that after 40 years of going after the rich and powerful, I think you make some powerful enemies. I think since 2004, things have been ramped up."

Lewis said ACORN has been demonized and news about it has served as a Republican fund-raising tool. She said this form of "modern-day ACORN McCarthyism has got to stop."

Appointed to her post in 2008, Lewis said she has been working hard to improve the group's management practices to "restrengthen, reorganize and put together the 21st-century ACORN."

"I'm proud to say that they've made it clear to me that I will continue to be tortured for at least another year. If the board thought or our membership thought that I should resign, I would do it in a heartbeat," she said.

"I don't think, however, it is fair to judge me as I'm cleaning up a previous administration, and now we have real documentation that these are political attacks on us, which is unprecedented."

All About Association of Community Organizations for Reform Now • Karl Rove