(CNN) -- Deliberations over what to do in Afghanistan are taking place behind closed doors, but the divisions among some of President Obama's trusted advisers are starting to emerge. 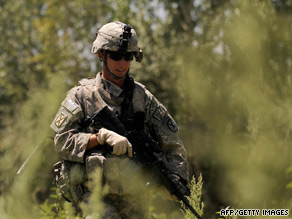 President Obama says the question of resources will come after his team nails down the best Afghan strategy.

Gen. Stanley McChrystal, the top U.S. commander in Afghanistan, has made no secret about his belief that the U.S. needs to send more troops now -- or it will risk failure, making an unusual appearance last week in front of a global strategic think tank to present his case.

"We need to reverse the current trends, and time does matter. Waiting does not prolong a favorable outcome. This effort will not remain winnable indefinitely," McChrystal said last week in a speech in London, England.

McChrystal argued the same point in an interview that aired last week on CBS' "60 Minutes."

Obama has said he needs time to meet with his advisers and evaluate the best way forward before making a decision about resources. As discussions continue this week -- including two meetings with his national security team -- some are suggesting that it would be best if talks about strategy be kept behind closed doors.

Watch as the administration will debate the way forward »

Asked whether McChrystal's public request for more troops has complicated the White House deliberations, national security adviser James Jones said, "Ideally, it's better for military advice to come up through the chain of command."

And Jones made clear that McChrystal's opinion is only part of the equation.

"I think that McChrystal and the others in the chain of command will present the president with not just one option ... but a range of options that the president can consider," said Jones, a retired Marine Corps general. "Troops are a portion of the answer but not the total answer."

Jones' comments came a day after at least eight American troops and two members of the Afghan national security forces were killed in a firefight at a remote outpost in the Nuristan province -- the largest number of Americans killed by hostile action in a single day in more than a year, according to CNN records.

Hundreds of militants in eastern Afghanistan attacked the troops, opening fire on an outpost from multiple locations with rockets, mortars and heavy-caliber machine guns, according to an initial U.S. military report on the battle.

Before Saturday's attack, the U.S. had announced plans to leave that outpost. McChrystal has said he wants to focus more on protecting Afghan civilians rather than holding remote outposts such as the one that was attacked.

Ed Rollins, a Republican strategist and CNN contributor, said the generals under Obama are playing a dramatically different game than in the previous administration.

"Under President Bush and Vice President Cheney -- who kind of had a war mentality -- they were very much at the table. I think McChrystal went into Afghanistan assuming he had that same premise," Rollins said. "I think you have other voices that aren't quite so pro-war, and I think to a certain extent, I think McChrystal made a big mistake by going out and publicly advocating."

In March, Obama announced plans to send more than 20,000 additional troops to Afghanistan to provide security for a national election. That move followed what Obama and others call years of inadequate resources in Afghanistan due to the Bush administration's focus on Iraq.

The Obama strategy was based on a counterinsurgency mission intended both to defeat terrorists based in Afghanistan while winning local support and helping with development.

McChrystal, who replaced Gen. David McKiernan as the top commander in the region in June, recently submitted his assessment of the situation to the Pentagon.

McChrystal is said to want up to 40,000 more troops to carry out the mission in Afghanistan. Obama has yet to respond to McChrystal's report, prompting opponents to accuse him of indecisiveness.

"And it's a rift that could be the sharpest break we've seen in years between a president and his commanding general in the field," Gergen said.

Some helping to shape the strategy support counterinsurgency, which would involve a large number of troops focused on fighting the Taliban, plus efforts to rebuild the country and its economic system. Others, such as Vice President Joe Biden, favor a counterterrorism strategy in which a limited number of troops would target only al Qaeda.

Some critics have said the White House is playing politics with the decision and putting U.S. troops at risk.

"It's well-known, it's broadcast all over television, that there are individuals -- including the vice president of the United States, now unfortunately the national security adviser, the chief political adviser to the president, Mr. Rahm Emanuel -- who don't want to alienate the left base of the Democrat Party," Sen. John McCain, R-Arizona, said last week.

Jones adamantly denied McCain's assertion. "I don't play politics, and I certainly don't play it with national security and neither does anyone else I know," he said.

Obama met with McChrystal for 25 minutes last week aboard Air Force One during the president's trip to Copenhagen, Denmark.

White House press secretary Robert Gibbs said Obama and others plan to use McChrystal's assessment, as well as the opinions of those on the diplomatic and intelligence sides, to come up with the best strategy for success in Afghanistan.