(CNN) -- How much will Barack Obama bet on Afghanistan? 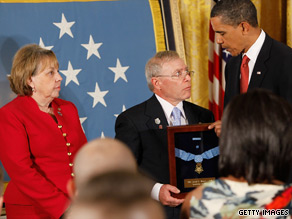 The U.S. President is trying to decide in an intensive series of meetings with senior officials that began this week, and he may be changing his mind.

"Right now," he said recently, "the first question is, are we doing the right thing? Are we pursuing the right strategy?"

As a candidate for the presidency, Obama declared the invasion of Iraq a diversion from America's war on terror and vowed to withdraw. By contrast, he called Afghanistan a "war of necessity" and pledged to win.

Once in the Oval Office, he shifted U.S. strategy in Afghanistan and sent more than 20,000 additional troops, bringing the current total to 68,000.

But now, roughly eight months into his presidency and eight years into the war, military and civilian casualties are setting new records. Obama's top general there is warning of the possibility of failure and is said to want for up to 40,000 more men to carry on the fight.

So the president is rethinking the central U.S. strategy for the second time in just months and his advisors are said to be split.

Under what's been dubbed "the Biden plan," the U.S. could concentrate on fighting al Qaeda rather than the Taliban. In other words, the strategy would move from counter-insurgency to counter-terrorism instead.

Part of the pressure for a new plan comes from American public opinion. CNN's most recent poll found that support for the war has fallen to a new low; just 39 percent of the public favor it. Fully 58 percent oppose it.

But Obama campaigned to win and Republicans are quick to remind him.

"He said this is a war of necessity, and I hope he'll stick to that," said his opponent in the presidential race, John McCain. "I hope and believe that he will make the right decision."

If Iraq was George Bush's war, Obama has made Afghanistan his own. Now, he's trying to decide whether to make it a much bigger one.