WASHINGTON (CNN) -- President Obama, in an effort to stimulate the economy and support critical research, announced $5 billion in grants during a visit to the National Institutes of Health on Wednesday. 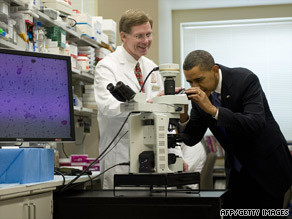 President Obama looks at a microscope with Dr. Marston Linehan at the National Institutes of Health on Wednesday.

The money comes from economic stimulus funds and is aimed at supporting research projects as well as the jobs related to them to fight cancer and other major diseases, Obama said in announcing the grants.

"Cancer has touched the lives of all Americans, including my own family's," the president said. "We all know the terrible toll on families and the promise of treatments that will allow a mother to be there for her children as they grow up, that will make it possible for a child to reach adulthood, that will allow countless people to survive a disease that's claimed far too many lives."

Obama, joined by Health Secretary Kathleen Sebelius and other top medical experts, toured a laboratory before speaking at the NIH campus in Bethesda, Maryland.

The White House says the research grants are part of the Recovery Act's overall investment of $100 billion in innovative research and advancing science and technology infrastructure.

All About Barack Obama • National Institutes of Health • Cancer