Pressure increases on Obama over Afghanistan

WASHINGTON (CNN) -- President Obama is under increasing pressure to decide whether the United States will commit more troops and resources to the conflict in Afghanistan. 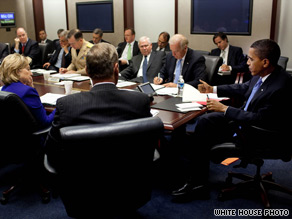 President Obama holds a strategy review on Afghanistan in the White House on Wednesday.

On Tuesday, the head of NATO met with the president and endorsed Obama's plan to fine-tune the strategy for Afghanistan before deciding on whether to deploy more troops.

"I agree with President Obama in his approach: strategy first, then resources," NATO Secretary General Anders Fogh Rasmussen said after meeting with Obama at the White House.

The meeting comes a day before Obama is scheduled to discuss Afghanistan strategy with his national security team.

"If the policy takes time to get right, then that's what the president intends to do," he said at the White House briefing Tuesday. "I think he owes that to the men and women in uniform that are there."

Gibbs said any decision will not be political, and that the president is "happy to hear the back and forth from both sides of this," but is going to take his time to "decide what is right for the American people."

But the controversy on what the president should do next comes as the top U.S. commander in the region, Gen. Stanley McChrystal, said the situation in Afghanistan is not getting better.

Compared to just two years ago, the number of American troops killed by roadside bombs is up 400 percent.

Earlier this month, McChrystal warned that more troops are needed there within the next year, or the nearly 8-year-old war war "will likely result in failure," according to a copy of the report obtained by The Washington Post. Watch Bill Clinton discuss the war in Afghanistan

But Obama's advisers are split on whether to send more troops.

Defense Secretary Robert Gates said he has full confidence in McChrystal, but said the administration must get its strategy right before addressing the question of additional resources.

Adm. Michael Mullen, though, told Congress he believes the United States will likely need to deploy more troops to Afghanistan.

Despite the differences, a top lawmaker on Capitol Hill wants answers now.

"The president must soon explain to the American people his reasons either for accepting the McChrystal plan or taking a different course," Senate Minority Leader Mitch McConnell, R-Kentucky, said.

"The failure to act decisively in response to Gen. McChrystal's strategy and his anticipated request for additional forces could serve to undermine some of the good decisions the president has made on national security."

He added that McChrystal should come to Washington to explain to Congress and to the American people how their strategy will work.

And judging by recent polls, the president and his top generals may need to do that sooner rather than later.

A USA Today/Gallup poll released last week showed that half of all Americans, or 50 percent surveyed, are against sending more troops to Afghanistan. The poll was taken September 22-23 and has a margin of error of plus or minus four percentage points.

That figure is slightly less than a CNN/Opinion Research Corp. poll taken September 11-13, showing that 58 percent of those polled oppose the war in Afghanistan, while only 39 percent favor it. The poll had a margin of error of plus or minus three percentage points.

"Most of the recent erosion in support has come from within the GOP," said CNN Polling Director Keating Holland. "Republicans still favor the war [unlike Independents and Democrats], but their support has slipped eight points in just two weeks."

Experts, meanwhile, are optimistic Obama will make the right decision.

Fred Kagan, Director of the Critical Threats Project for the American Enterprise Institute, said he is "reasonably confident" that the number of troops being mentioned would "allow us to achieve success in the critical phase of retaking the initiative from the insurgency, and then beginning a counter-offensive to take back the other key areas that are threatened."

Kimberly Kagan, the president of the Institute for the Study of War, said the general rule of thumb when it comes to determining how many troops is necessary is "one counter-insurgent per every 50 people."

"We actually need enough forces on the ground to secure the population, and that if we do so and if we apply those forces wisely, we really do have every opportunity to support the people, to help the government reach the people, and help the people reject the insurgents," she said.

But the other decision for the administration is likely to be on neighboring Pakistan.

Zalmay Khalilzad, the former U.S. ambassador to Afghanistan, to Iraq, and to the United Nations, said it's important for the United States to focus on Taliban and al Qaeda safe havens in the region.

"That sanctuary still continues, and we cannot succeed easily without dealing sharply with the issue of the sanctuary," he told Christiane Amanpour, CNN's chief international correspondent and anchor of "Amanpour."

Khalilzad said it's important for Afghan forces to step up to the plate at a much faster pace than has been done so far.

"Afghanistan is the same size, population-wise, as Iraq -- bigger territory. But the number of Afghan security forces is less than 100,000 on the army and police. ... Iraq has 700,000-plus security forces," he said.

All About Afghanistan • Barack Obama