WASHINGTON (CNN) -- Supreme Court Justice Ruth Bader Ginsburg was released from a Washington hospital Friday, a day after being admitted with symptoms of fatigue and lightheadedness. 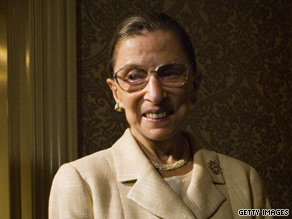 She plans to return to work Friday afternoon, according to a Supreme Court spokesman.

The 76-year-old justice is feeling better and not suffering from any major immediate problems, sources close to Ginsburg said. Despite calls from her family and colleagues to slow down, she is anxious to return to her office, they added.

Ginsburg fell ill in her chambers Thursday, roughly an hour after receiving a treatment for iron deficiency, according to a statement from the high court. An in-house physician performed blood tests and found her to be in stable health.

Her symptoms improved, but she was taken to the Washington Hospital Center as a precaution, the court statement said.

The statement did not mention Ginsburg's earlier struggles with cancer.

She underwent surgery on February 5 for pancreatic cancer, and she was back on the bench 18 days later.

Doctors said at that time the disease was caught early and had not spread beyond her pancreas.

Ginsburg subsequently said she planned to undergo a "precautionary" course of chemotherapy.

She was encouraged by a medical exam in July that showed her in completely normal health, sources said.

Ginsburg has been on the Supreme Court since 1993 after President Clinton nominated her. Before reaching the high court, she was a law professor at Rutgers University School of Law and Columbia Law School. She also was general counsel and on the national board of directors for the American Civil Liberties Union.