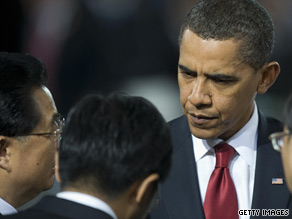 And the strategy to build a coalition with Russia and China "has already begun to bear fruit," one senior U.S. official said.

The officials declined to be identified because of the sensitive nature of the negotiations.

Like the United States, Russia and China are both veto-wielding members of the U.N. Security Council.

Both countries have long opposed additional sanctions against Iran for its nuclear program, although Russian leaders recently have said they might be willing to compromise.

Iran admitted to the existence of a second uranium enrichment plant in a letter sent to the International Atomic Energy Agency on Monday, the IAEA said Friday.

The announcement prompted Obama, British Prime Minister Gordon Brown and French President Nicolas Sarkozy -- all in Pittsburgh, Pennsylvania, for the Group of 20 economic summit -- to hold a news conference in which they threatened a stiff response if Iran fails to conform to international obligations regarding nuclear development.

"Iran is breaking rules that all nations must follow," Obama said.

He called on the Iranian government to "take concrete steps" to demonstrate it will comply with its international guidelines to ensure its nuclear program is for civilian use and not a covert weapons program.