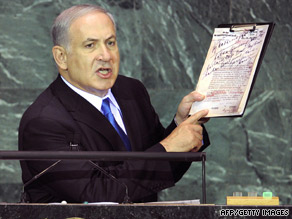 He said Ahmadinejad's comments were a disgraceful "mockery of the charter of the United Nations." He said people who listened to Ahmadinejad gave "legitimacy to a man who denies the murder of 6 million Jews, while promising to wipe out the state of israel, the state of the Jews."

"Yesterday, the man who calls the Holocaust a lie spoke from this podium. To those who refused to come and to those who left in protest, I commend you. You stood up for moral clarity, and you brought honor to your countries.

"But to those who gave this Holocaust denier a hearing, I say on behalf of my people, the Jewish people, and decent people everywhere, have you no shame? Have you no decency?"

Noting that the United Nations was founded "after the carnage of World War II, after the horrors of the Holocaust, it was charged with preventing the recurrence of such horrendous events."

"Nothing has undermined that mission. Nothing has impeded it more than the systematic assault on the truth."

Netanyahu showed a copy of minutes of senior Nazi officials when they met to discuss how to carry out the extermination of Jewry and noted plans to construct concentration camps. Are such plans "lies?" he asked.

Venezuelan President Hugo Chavez talks to CNN's Larry King. What does he think of President Obama and the United States?
Tonight at 9 ET

And he wanted to know whether the tattoos branded on the arms of Auschwitz survivors are lies as well.

As for the Iranian regime, he said it "is fueled by an extreme fundamentalism that burst onto the world scene three decades ago after lying dormant for centuries."

"In the past 30 years, this fanaticism has swept across the globe with a murderous violence that knows no bounds and with a cold-blooded impartiality in the choice of its victims," he said.

He said "women, minorities, gays or anyone else deemed not to be a true believer is brutally subjugated," and he said "the most urgent challenge" facing the United Nations is "to prevent the tyrants of Tehran from acquiring nuclear weapons."

"Are the members of the United Nations up to that challenge? Will the international community confront a despotism that terrorizes its own people as they bravely stand up for freedom? Will it take action against the dictators who stole an election in broad daylight and then gunned down Iranian protesters who died on the sidewalks, on the street, choking on their own blood? Will the international community stop the terrorist regime of Iran from developing atomic weapons, thereby endangering the peace of the entire world?"

Netanyahu challenged the United Nations to stand by the side of Iranians protesting the Ahmadinejad regime.

Will the United Nations "stand by their side?" he asked.

"Well, ladies and gentlemen, the jury's still out on the United Nations, and recent signs -- recent signs are not encouraging."

He cited the U.N. Human Rights Council report on Israel's Gaza offensive, which he said was "falsely equating terrorists with those they targeted."

He said Hamas militants fired rockets into Israel from Gaza "for eight long years," but a resolution hadn't passed condemning those criminal attacks."

He said Israel had hoped for peace when it withdrew from Gaza a few years ago.

As he called attention to the militants' strikes on Israel, Netanyahu noted the warfare during World War II, when Nazis rocketed British cities and then the allies leveled German cities, a choice made by British and American leaders "fighting an evil force in World War II."

But he said that under the "twisted standards" of the U.N. Human Rights Council, U.S. President Franklin Roosevelt and British Prime Minister Winston Churchill would have been "dragged ... to the dock as war criminals."

"Israel chose to respond differently" than the allies, Netanyahu said.

"Faced with an enemy committing a double war crime, of firing on civilians, while hiding behind civilians, Israel sought to conduct surgical strikes directed against the rocket launchers themselves."

He said it was "no easy task" since the militants were firing missiles from homes and schools, using mosques as weapons depots and carrying explosives in ambulances. He said Israel worked to inform Palestinians via fliers and text messages to vacate targeted areas.

"Never has a country gone to such extraordinary lengths to remove the enemy's civilian population from harm's way, yet faced with an absolutely clear-cut case of aggressor and victim, who do you think the United Nations Human Rights Council decided to condemn? Israel."

Netanyahu, noting that the United Nations in 1947 voted to establish a Jewish and an Arab state, said "Arabs rejected it and invaded the embryonic Jewish state with the hopes of annihilating it."

"We are not strangers to this land. This is our homeland. But as deeply connected as we are to our homeland, we also recognize that the Palestinians also live there. And they want a home of their own. We want to live side by side with them, two free peoples, living in peace, living in prosperity, living in dignity. Peace, prosperity and dignity require one other element."

He said Palestinians must have the power to govern themselves, but it must be "effectively demilitarized."

"I say 'effectively' because we don't want another -- another Gaza or another south Lebanon, another Iranian-backed terror base abutting Jerusalem and perched on the hills a few kilometers from Tel Aviv. We want peace."

Netanyahu made reference to Iran again at the end of his speech, saying "peace can be achieved." But there needs to be an effort, he said, "to roll back the forces of terror led by Iran that seek to destroy peace, that seek to eliminate Israel and to overthrow the world order. The question facing the international community is whether it is prepared to confront those forces or to accommodate them."

The leftist and populist Venezuelan leader, whose friendship with the Iranian regime and Cuba has spurred antagonism with the United States, is not shy about speaking his mind. And he has launched his share of fiery diatribes against Washington. Three years ago, he called former President George W. Bush the "devil" the day after Bush spoke, saying the lectern "still smells of sulfur."

In his rambling speech Thursday, Chavez drew on his 2006 remarks, saying, "It doesn't smell of sulfur. It's gone. No, it smells of something else. It smells of hope."

He spoke highly of President Obama, saying he is an "intelligent man" and comparing him to President John F. Kennedy.

"I hope God will protect Obama from the bullets that killed Kennedy," he said. "I hope Obama will be able to look and see, genuinely see, what has to be seen and bring about a change."

Watch what Chavez has to say about Obama »

He did, however, criticize some U.S. policies, questioning whether there are "two Obamas."

Speaking for almost exactly an hour, Chavez also accused the Pentagon of being behind the ouster of Honduran President Jose Manuel Zelaya in a June coup, called for the United States to lift the "savage, murderous blockade" on Cuba, and was critical of plans to open U.S. military bases in Colombia. In addition, he criticized capitalism and extolled the virtues of socialism, saying it is "the road to salvation for this planet."

Chavez's and Netanyahu's comments come a day after the Iranian and Libyan leaders lit up the U.N. General Assembly floor with sharp critiques.

Watch reactions to the two speakers »

Wednesday's session was punctuated by the performance of Libyan leader Moammar Gadhafi, who delivered a blistering, wide-ranging 96-minute rant, reserving most of his ire for the United States and the U.N. Security Council.

Also on Wednesday, Ahmadinejad slammed a variety of targets, including capitalism, the United States and Israel. Ahmadinejad said he had won "a large majority" in the June 12 elections that his critics say were rigged. Before his talk and near the United Nations, more than 400 anti-Ahmadinejad protesters demonstrated.

Iraqi President Jalal Talabani also spoke to the General Assembly, telling other world leaders the year was a significant one for his nation, particularly because of the signing of an accord with the United States under which U.S. troops withdrew from Iraqi cities in towns by June 30.

But, he said, the nation continues to see attacks on its civilians and others, and the Iraqi government believes "external parties" are influencing the violence. Talabani said the U.N. Security Council should form a commission to investigate.

In addition, he said, the Security Council should issue a resolution that terminates previous resolutions dealing with Iraq, under which the country is still bound, "because the situation that necessitated those resolutions no longer exists."

And he called upon those housing Iraqi refugees to encourage them to return to Iraq, "because Iraq needs the expertise of all Iraqis."