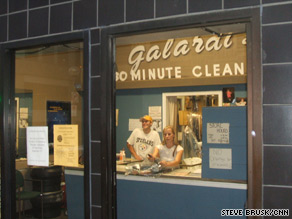 Workers inside Galardi's Cleaners in Pittsburgh prepare to shut the business down on Wednesday night.

"It's like Christmas Eve. There was no traffic," and few customers, she said as workers prepared to board up the windows of the dry cleaners she manages. Galardi's Cleaners will be closed the rest of the week -- one of dozens of downtown businesses shutting down as the G-20 economic summit comes to town.

"It's like a ghost town. I don't know why we opened today," Martinko said. "It's been hard. We have to close two days, and Friday is one of our best days."

The city of Pittsburgh left it up to individual businesses whether to remain open during the two-day summit, which begins Thursday. Mayor Luke Ravenstahl said officials are "doing our very best to try to ensure business as normal could go on."

But for businesses like Galardi's, concern over protests like those at April's G-20 gathering in London, and the cordoning off of downtown, made closing the best option.

Many major streets and exit ramps from the freeways going into downtown were closed, as security fences and concrete barriers were moved into place.

Martinko said an officer who patrols her street said, "You're not getting into downtown." She said lack of parking and other businesses in the area meant few patrons would make it even if they opened their doors.

Her biggest business this week: Secret Service agents staying at nearby hotels who came in every day, even as her regulars stayed away.

For the store, in business since 1917, it means no paychecks for the six employees, and two days with no income. It also means a bill to protect the store's four window panes and glass door. One contractor asked for $1,100.

As hammers pounded plywood onto the front windows next door, Martinko said safety outweighed any business interests. "I'm more afraid of the protesters," she said. "I don't care about the G-20. It's the protesters. I'm hoping maybe it's not as bad as Seattle and London." At the 1999 World Trade Organization meeting in Seattle, Washington, thousands of protesters -- some estimates put the number at 50,000 -- descended on the city.

At a fast-food restaurant across the street staying open this week, employees watched a line of officers march in formation by their front doors. "It's the state police," a woman at the register said. "I hope they stay here."

Watch why G-20 is important to Pittsburgh »

Along Pittsburgh's Penn Avenue, in the shadows of the convention center where world leaders will gather, customers Wednesday evening ate on the sidewalks of swanky restaurants behind large fences already in place. At a print shop, "AlphaGraphics Welcomes the World" banners hung -- but on the large pieces of plywood that boarded up the store.

The sign is gone from a Marine recruiting station near an intersection where protesters are expected. In its place: sheets of plywood with a floral pattern.

Ravenstahl said the concern over trouble this week is "very real. We knew that when we said yes to hosting the summit. We understand that when we have an international event like this, we have public safety concerns that go with it."

He said he thinks steps to prevent violence will succeed, and said his office will be open Thursday as usual.

"We spoke to police in Seattle and London, to kind of learn from some of their mistakes" and to get advice, he said. Saying 95 percent of demonstrators have peaceful intent, Ravenstahl noted police are asking groups to "help us identify the ones who are there to cause harm."

Local officials say they are sympathetic to the effect on downtown workers.

"We know it's an inconvenience," Allegheny County Chief Executive Dan Onorato said. But he added that the focus on the area is already leading to new convention bookings this year. "It will be a win for all the businesses. If more people come here because of this, every single business will get the benefit," Onorato said.

Ravenstahl said, the short-term inconvenience will be "a small price to pay, in my opinion, for the long-term economic benefit."