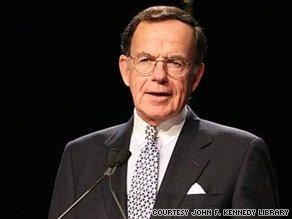 Paul Kirk will fill the Senate seat left empty by the death of the late Sen. Ted Kennedy.

Kirk will not seek the open seat in January's special election, Patrick said, "but for the next few months, he will carry on the work and the focus of Sen. Kennedy, mindful of his mission and his values and his love of Massachusetts."

Primaries to fill the seat for the remaining three years of Kennedy's six-year term are set for December 8, while the general election will take place on January 19.

Kirk said the appointment to the Senate seat is a "profound honor" that he accepts with "sincere humility."

"During our years together, I was personally privileged to have had Sen. Kennedy's friendship, his trust and his confidence," Kirk said. "He often said that representing the people of the Commonwealth of Massachusetts in the Senate of the United States was the highest honor that he could possibly imagine. And it's certainly nothing I imagined, but it will be my highest honor as well."

Kirk said he expected to be sworn in on Friday.

Who is Paul Kirk?

The appointment gives Democrats a crucial 60th vote in the Senate as the chamber weighs President Obama's health care proposal.

Patrick said Kirk was chosen among 6 finalists for the post.

Kirk was a longtime senior aide to Kennedy and served as chairman of the national Democratic Party in the late 1980s.

Two Kennedy family associates told CNN on Wednesday that Kirk was the family's favorite to fill his vacant Senate seat. One source said Kennedy's widow, Vicki Kennedy, was among the family members supporting a Kirk appointment.

In a statement released Thursday, Obama called Kirk a "distinguished leader, whose long collaboration with Senator Kennedy makes him an excellent, interim choice to carry on his work until the voters make their choice in January."

The family of Kennedy said Patrick "could not have selected a more outstanding person to serve as Massachusetts's interim senator than Paul Kirk."

"Senator Kennedy always said that serving the people of Massachusetts in the United States Senate was the greatest honor of his life. He would be so pleased that Paul Kirk will also now have that honor," the family said in a statement.

He accused Democrats of naming an interim senator in order to get another vote for the health care legislation.

Massachusetts lawmakers voted Wednesday to approve a measure giving Patrick, a Democrat, the power to appoint an interim replacement for Kennedy until a new election can be held.

Republican State Sen. Scott Brown has announced that he will run for the seat on the Republican side, while state Attorney General Martha Coakley, Celtics co-owner Stephen Pagliuca and Rep. Mike Capuano are battling for the Democratic nomination.