HONG KONG, China (CNN) -- Sarah Palin touched on a host of topics -- including Reaganomics, China and human rights, Tibet, the Asian and U.S. economies, family and moose in Alaska -- as she delivered a speech to investors Wednesday in Hong Kong, according to audience members. 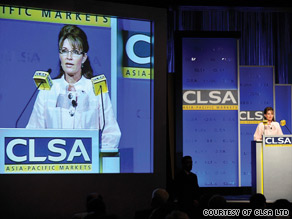 The former Republican vice presidential candidate was the keynote speaker at the 16th CLSA Investors' Forum, in what was billed as her first speech outside North America. She recently stepped down as Alaska's governor.

Her 90-minute address, which was closed to the media, was heard by 1,100 people, according to CLSA head of communications Simone Wheeler.

Those who attended her speech said she did well, though some could be seen leaving early on. A few of those people said they were heading to other forum offerings. Most people declined to speak with the media about the speech.

Would you pay to see Sarah Palin give speech? Soundoff below

"I can't say I was actually impressed," said Mel Goode, a business developer from New York who lives in Hong Kong. "She speaks well -- a broad spectrum of what her beliefs are, family views.

"She didn't get (into) anything too harsh ... just kept it, five children, my husband's here, we believe in what Asia's doing, America has a way to go to get itself back together, Reaganism."

One area she touched on was human rights, calling on Beijing to be more attentive to the issue in Tibet and countries such as Myanmar and North Korea, he added.

Rajesh Kothari, a fund manager, noted that Palin's "address was more geared towards politics and very focused on China."

"She did speak about the political implications of China's rise on Asia and the region, and China with America," he said. "I was quite impressed by her knowledge. It seemed like she did her homework now, this time around."

Palin also spoke about Alaska, the need for less government and fewer regulations, fiscal responsibility and "how the U.S. and Asia can be better partners on the global stage," said Jasbeena Layman, a fund manager in the United States.

"I think she is very well spoken," she said.

Palin's political ambitions are unclear, though she has recently attacked U.S. President Barack Obama's health care initiative. During the 2008 presidential campaign, she was lampooned by critics and comedians for suggesting that she had foreign policy experience because she was then governor of Alaska and "you can actually see Russia" from part of the state.

Goode said it appeared Palin had "learned quite a bit" from the vice presidential campaign spotlight.

"I am sure she's taken enough criticism where, at this point, she would definitely try to learn a little bit in her mistakes," he said.

He said she shied from discussing U.S. politics, though she did say it had been 10 months since Obama took office and Americans were questioning whether he had made significant headway.

"What we look to do is invite our keynote speakers who we feel are opinion makers, who are newsworthy and who we feel our clients -- a very broad international client base -- would be interested in hearing from," Wheeler said Monday, noting that CLSA was a politically neutral, independent brokerage.

Chad Tendler, who works in the financial industry, said Palin's speech tried "to tick a lot of boxes," touching on domestic and foreign policy, as well as issues that resonate with investors. He said she spoke about the U.S. relationship with China and recent issues, such as a tariff dispute between the two nations involving the sale of tires.

He said her speech was "very well scripted," but a question-and-answer session afterward "brought out a bit more color about her as a person" and reminded everyone of "the candidate who we all saw campaigning for vice president."

She talked about her family, her interests and even Alaskan moose, he said.

"She said on her way to the airport in Anchorage, there was a moose in the town," he said. "As she arrived in Hong Kong, coming in from the airport, she was surprised -- not surprised -- but, very different from the rural setting to an urban setting."

Wheeler said Palin would be in Hong Kong only for the speech, adding that it was a short trip. Chinese-language media did not give much coverage to her appearance, and some residents and visitors were surprised to learn she was in town.