At U.N., Obama calls for new era in world relations

UNITED NATIONS (CNN) -- President Obama made a forceful call Wednesday for a new era in global relations, urging the United Nations to move past old divisions and disputes to reassert itself as a leading force in confronting the most pressing issues of today. 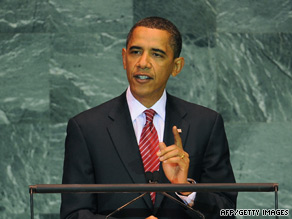 In his first speech as president to the U.N. General Assembly, Obama sought to distance his young administration from unilateral policies of his predecessor, while pledging a U.S. commitment to work with the United Nations in forging a better common future for all.

"The United States stands ready to begin a new chapter of international cooperation -- one that recognizes the rights and responsibilities of all nations," Obama said in concluding a speech that received strong applause.

He told the assembly that the world's countries, both individually and collectively as the United Nations, have failed to put aside old ways of thinking and acting as they confront threats to global security and stability.

"Now is the time for all of us to take our share of responsibility for a global response to global challenges," he said. "If we are honest with ourselves, we need to admit that we are not living up to that responsibility."

Obama cited issues such as terrorism, long-running conflicts, nuclear proliferation, climate change, poverty and pandemic disease, then added: "The magnitude of our challenges has yet to be met by the measure of our action." Read full transcript of Obama's speech

The speech outlined four pillars for collective world focus -- nuclear disarmament and nonproliferation, the pursuit of peace, combating climate change, and increasing economic development and opportunity -- and directly addressed long-standing issues such as the Middle East conflict as well as more recent challenges including the global economic recession.

Obama made a strong call for renewed efforts to reach a Middle East agreement that creates a secure Israel and an independent Palestinian state.

"The time has come to relaunch negotiations -- without preconditions -- that address the permanent-status issues: security for Israelis and Palestinians; borders, refugees and Jerusalem," he said. "The goal is clear: two states living side by side in peace and security -- a Jewish state of Israel, with true security for all Israelis; and a viable, independent Palestinian state with contiguous territory that ends the occupation that began in 1967, and realizes the potential of the Palestinian people."

His statement prompted applause, and Obama received an ovation when he later stated: "The United States does Israel no favors when we fail to couple an unwavering commitment to its security with an insistence that Israel respect the legitimate claims and rights of the Palestinians.

"And nations within this body do the Palestinians no favors when they choose vitriolic attacks against Israel over a constructive willingness to recognize Israel's legitimacy, and its right to exist in peace and security."

Obama also said Iran and North Korea "must be held accountable" if they continue to ignore international nuclear weapons treaties.

"If the governments of Iran and North Korea choose to ignore international standards; if they put the pursuit of nuclear weapons ahead of regional stability and the security and opportunity of their own people; if they are oblivious to the dangers of escalating nuclear arms races in both East Asia and the Middle East -- then they must be held accountable," Obama said.

"The world must stand together to demonstrate that international law is not an empty promise, and that treaties will be enforced," he continued. "We must insist that the future not belong to fear."

Earlier, Obama cited differences between his policies and those of the previous U.S. administration under President George W. Bush, who was considered by many as unilateralist with little respect for the United Nations.

"I took office at a time when many around the world had come to view America with skepticism and distrust," Obama said. "Part of this was due to misperceptions and misinformation about my country. Part of this was due to opposition to specific policies, and a belief that on certain critical issues, America has acted unilaterally, without regard for the interests of others. This has fed an almost reflexive anti-Americanism, which too often has served as an excuse for our collective inaction."

He received applause when he told the assembly that one of his first acts as president was to prohibit "without exception or equivocation, the use of torture by the United States of America," in reference to enhanced interrogation techniques of terrorism suspects.

Obama cited other U.S. steps under his administration to confront global issues -- appointing a special Middle East envoy, investing $80 billion in clean energy technology, efforts to ease the global recession and halt the spread of nuclear weapons -- and also noted, again to applause, how the United States has paid its U.N. bills and joined the Human Rights Council.

At the same time, Obama made clear the United States would continue its fight to destroy the al Qaeda network responsible for the September 11, 2001, attacks and other terrorism, but he also called for a more collective approach to such global threats.

"Those who used to chastise America for acting alone in the world cannot now stand by and wait for America to solve the world's problems alone," he said. "We have sought -- in word and deed -- a new era of engagement with the world. Now is the time for all of us to take our share of responsibility for a global response to global challenges."

Obama will lead a special session of the U.N. Security Council dealing with nuclear issues on Thursday.

He will also travel to Pittsburgh, Pennsylvania, for the Group of 20 summit, where he will host a two-day meeting of representatives of the world's largest economies.