WASHINGTON (CNN) -- ACORN filed suit Wednesday in Baltimore, Maryland, against two filmmakers who secretly recorded videos embarrassing to the agency, claiming the pair violated state law by recording their conversations without permission of the employees involved. 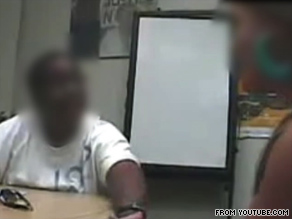 The lawsuit seeks an injunction preventing the further distribution of the videos.

The recordings represented "clear violations of Maryland law that were intended to inflict maximum damage to the reputation of ACORN," the community organizer's attorney, Arthur Schwartz, said. "Unfortunately, they succeeded."

Defendants James O'Keefe and Hannah Giles, conservative activists posing as a pimp and a prostitute seeking advice on setting up a brothel with underage girls from El Salvador, recorded the videos in Baltimore and three other cities.

Breitbart.com, registered to Washington Times conservative commentator Andrew Breitbart, is a co-defendant in the lawsuit. Contacted by CNN, Breitbart had no comment on the suit. O'Keefe and Giles did not respond to requests for comment.

The tapes show ACORN employees suggesting or condoning a series of illicit actions. The two Baltimore employees -- Shera Williams and Tonja Thompson, who were fired -- are co-plaintiffs in the lawsuit.

"Although we do not condone what our former employees did, no matter how entrapped they were, we are also committed to our 500,000 members that we will hold the defendants civilly and criminally responsible for their violations of Maryland laws and for the damages inflicted upon ACORN's reputation," said Bertha Lewis, the organization's chief organizer.

ACORN -- the Association of Community Organizations for Reform Now -- said O'Keefe and Giles also attempted to capture similar videos at ACORN offices in other cities but failed.

In addition, the organization announced a hiring freeze, new training programs and an internal investigation in the wake of the video controversy.

A leading liberal Democrat in the House blasted ACORN Wednesday and said he is urging the White House to withhold any federal funding for the group.

"I am very disappointed in the actions that were taken by members of ACORN," Rep. Barney Frank, D-Massachusetts, chairman of the House Financial Services Committee, said in a statement.

"I do not believe that ACORN's response has been adequate for an organization that has received public funding," he said.

Frank said he is urging the Obama administration to withhold any additional funding for ACORN "at least until there is very firm evidence that the abuses of which ACORN members have been guilty have not only ceased, but that procedures are in place to prevent them from happening again."

"While we greatly respect Rep. Barney Frank and have enjoyed the work we have shared over the years," the statement said, "ACORN disagrees with his position on the recent Congressional action to single out our organization and bar us from competing for federal grants."

Two other ACORN employees also were fired after O'Keefe, Giles and co-defendant Breitbart.com released the videos.

ACORN for some time has been in the cross-hairs of conservatives, who have repeatedly pushed for voter registration fraud investigations against the organization.

At least 11 states already had been investigating ACORN for alleged voter registration fraud stemming from the general election in 2008. Most of the allegations concern fraudulent forms submitted by temporary ACORN employees hired to register voters in poor and minority areas. None of the allegations relate to fraudulent voting.

ACORN itself initiated an investigation in Florida that resulted earlier this month in 11 arrests for fraudulent voter registration.