Leaders to focus on climate change at summit

UNITED NATIONS (CNN) -- World leaders converge Tuesday in New York to focus on climate change, with the clock ticking down toward a summit this year in Denmark, where a global climate change pact is to be signed. 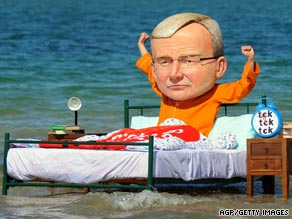 In Melbourne, a man dressed as Australia's prime minister highlights that leaders must "wake up" to climate change.

Negotiations for the global pact have stalled, and Tuesday's gathering is aimed at jump-starting those talks.

Roundtables are also planned, all with the overarching and generally accepted goal of limiting the rise of Earth's temperature to within 2 degrees Fahrenheit above its temperature before the industrial revolution.

Hu's speech will be of particular interest, given that his country is the world's largest emitter of greenhouse gases, analysts said.

"Climate change has the potential to really fundamentally reshape dynamics between these big and significant countries in a way we've never seen before," said Julian Wong, a senior energy analyst at the Center for American Progress, a liberal think tank based in Washington, D.C.

Leaders are expected to discuss how climate change affects energy, food security, trade, finance and international security, according to the United Nations.

"We have an unprecedented opportunity to prevent climate change from slipping out of control and to jump-start the transformation to a safer, cleaner, more prosperous green economy that benefits all," said U.N. Secretary-General Ban-Ki-moon.

The full-day summit comes before representatives of the world's largest economies meet Thursday in Pittsburgh, Pennsylvania, for the Group of 20 summit.