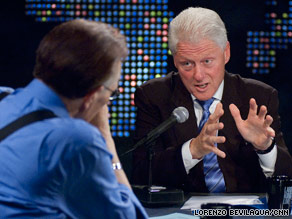 "I believe that some of the right-wing extremists which oppose President Obama are also racially prejudiced and would prefer not to have an African-American president," Clinton told CNN's Larry King in a wide-ranging interview that aired Monday evening.

"But I don't believe that all the people who oppose him on health care -- and all the conservatives -- are racists. And I believe if he were white, every single person who opposes him now would be opposing him then."

Clinton discussed a variety of issues facing the Obama administration -- from health care to the war in Afghanistan -- on the eve of the fifth annual meeting of the Clinton Global Initiative.

Regarding race, the former president was referring to an outburst from Rep. Joe Wilson, R-South Carolina, who shouted, "You lie!" at Obama during the president's recent joint address to Congress and also former President Carter's assessment that racism is an obstacle for the current president.

"While I have devoted my life to getting rid of racism, I think this [health care] is a fight that my president and our party -- this is one we need to win on the merits," Clinton said.

On the Arab-Israeli conflict -- which Clinton tried to address while in the White House -- the former president said it's an issue that first has to be addressed by the Palestinians and Israelis. Obama has set up meetings with leaders from both sides this week as the U.N. General Assembly meets in New York.

"First, it's more up to them than it is to President Obama," Clinton said.

"I think if we can just get them to start talking again around the two-state solutions, around restoring a sense of normalcy and creating a Palestinian state ... I think you would be surprised how quickly at least they would come down to all the same issues that they were down to in 2000 when I made my proposal."

In August, Clinton made headlines when he traveled to North Korea to gain the release of two detained U.S. journalists, Euna Lee and Laura Ling. During his visit, Clinton met with reclusive leader Kim Jong Il, whose government is under U.N. sanctions for its efforts to develop a nuclear weapons program.

Asked about how it felt to help the journalists, Clinton said, "It was humbling, and it was a wonderful feeling. They're really fine young women."

Clinton also discussed the conflict in Afghanistan, addressing top U.S. Gen. Stanley McChrystal's report warning Obama that more troops are needed within the coming year or the nearly 8-year-old war "will likely result in failure," according to a copy of a 66-page document obtained by The Washington Post.

Obama has promised to ask "tough questions" before deciding whether to send additional troops to Afghanistan, saying it was necessary to have a clear strategy in place before deploying resources.

"My guess is that he will say, 'You may be right, general, but we still have this ongoing election count, let's wait until that happens, let's see what the new government's going to be, let's see if both the top two finishers are going to be in the government, which is a possibility,'" Clinton said.

"And if that means there's going to be more broad-based support because we got everybody together right after the election was over, then it's clear that more soldiers will be even more effective."

Clinton, a New York resident, also touched on a New York Times report that Obama administration officials have urged New York Gov. David A. Paterson to withdraw from the 2010 race. White House officials acknowledged to CNN that aides have conveyed to Paterson's camp they are aware of the governor's unpopularity and the political troubles it could cause.

"Well, first of all, I have no direct knowledge of it," Clinton said, adding later, "The truth is I can't criticize either one of them."

"I think Paterson is in a tough spot, but he's done a better job than he's gotten credit for," he said. "So he's done some good things. I think that he will do what he thinks is right for the people of New York in the end and for himself. I think the president understandably wants to hold on to the governorship of the fourth biggest state of the country."