(CNN) -- Afghan President Hamid Karzai said Monday that he backs a recommendation from the top U.S. commander in Afghanistan to boost American troop levels in the embattled Islamic nation. 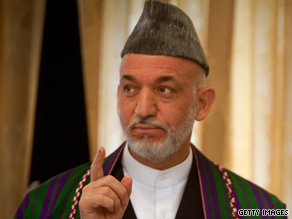 The call for more U.S. soldiers is "the right approach ... and we back it," Karzai said during an interview with CNN's Christiane Amanpour. He also criticized military allies for failing to attack al Qaeda and other extremists in sanctuaries beyond Afghanistan's borders.

Karzai emphasized the need for greater protection of Afghan communities and civilians during a wide-ranging discussion on the premiere of the new CNN show "Amanpour."

The United States has about 62,000 troops in Afghanistan, with NATO and other allies contributing about 35,000 more. The Pentagon is planning to add 6,000 troops by year's end.

Top U.S. Gen. Stanley McChrystal has warned President Obama that more troops are needed within the next year or the nearly 8-year-old war "will likely result in failure," according to a copy of a 66-page document obtained by The Washington Post.

Some critics of an increased U.S. military presence have questioned the legitimacy of Karzai's government in the wake of Afghanistan's disputed August presidential election results.

Karzai conceded Monday that the question of election fraud is a "serious issue" that merits investigation. He added, however, that any attempt by opponents to engineer a specific outcome and force another round of voting would constitute a "betrayal" of the "will of the Afghan people."

Results of the recently completed count gave Karzai 54 percent of the vote, but the numbers won't be certified until authorities investigate allegations of irregularities.

More than 200,000 of the nearly 5.7 million votes cast have been thrown out, including 29,000 in a swath of Afghanistan where Karzai has strong support. European Union observers have raised questions about 1.5 million more.

Karzai needs to get more than 50 percent of the vote to avoid a runoff in his bid for a second term. His chief rival, former Foreign Minister Abdullah Abdullah, has said he has "no doubt" Karzai and his supporters worked to rig the vote in the incumbent's favor.

In the CNN interview, Karzai admitted that corruption is a serious problem for his government but also argued that it is a problem for international organizations involved in the distribution of aid in Afghanistan.

"We will fix our problems," and the government's partners should fix theirs, he said.

The government of Afghanistan "is credible and legitimate," he insisted. But it's a government "that lacks resources."

In the past year, U.S. troops and a NATO-dominated coalition have battled a resurgent Taliban, the al Qaeda-allied Islamic militia that ruled most of the country until its 2001 ouster.

Washington poured an additional 21,000 troops into Afghanistan to provide security for the recent election.

Watch bloggers weigh in on whether more troops are needed »

In August, 48 U.S. troops were killed in the fighting, surpassing the previous high of 45 in July. And the war has spread into Pakistan, where Taliban fighters are battling government troops in that nuclear-armed country.

McChrystal's report came in response to an order from Obama for "a soup-to-nuts re-evaluation" of the U.S. strategy, refocusing "on what our original goal was, which was to get al Qaeda, the people who killed 3,000 Americans" in the September 11, 2001, attacks.

All About Hamid Karzai • Afghanistan • The Taliban