WASHINGTON (CNN) -- President Obama says that despite signs of economic recovery, the country will not see large-scale job growth until next year. 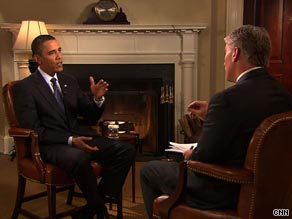 In a wide-ranging interview broadcast Sunday on CNN's "State of the Union," Obama said reversing job losses from the recession will come at the end of the recovery period, not the start.

"I want to be clear, that probably the jobs picture is not going to improve considerably -- and it could even get a little bit worse -- over the next couple of months," Obama told CNN chief national correspondent John King in the interview, conducted Friday.

It was one of five interviews Obama conducted for broadcast over the weekend as part of his stepped-up campaign to push his priority issues, especially promoting comprehensive health care legislation. In addition to CNN, Obama spoke to CBS, NBC, ABC and Univision

Obama told CNN he believes the economy will be creating jobs through the end of 2009 -- but not enough to keep pace with population growth nor to make up for steep losses in employment that occurred earlier this year.

He called the issue "something that I ask every single one of my economic advisers every single day, because I know that ultimately the measure of an economy is, is it producing jobs that help people support families, send their kids to college?"

"That's the single most important thing we can do," Obama said.

On health care reform, another of his top domestic agenda items, the president rejected a recent comment by Senate Minority Leader Mitch McConnell, R-Kentucky, that conservative opponents were "winning the health care debate."

McConnell was referring to heated town hall meetings around the country and a recent march on Washington organized by conservatives opposed to Obama's policies, which he said were forcing the president and Democrats to soften some positions.

Asked about McConnell's comment, Obama responded "Well, you know ... they were saying they were winning during the election, too."

McConnell appeared later on the program and was asked what defines winning the health care debate.

"Winning is stopping and starting over and getting it right," McConnell said. "I don't know anybody in my Republican conference in the Senate who's in favor of doing nothing on health care. We obviously have a cost problem and we have an access problem."

He called for a less comprehensive approach that focused on specific issues such as limiting medical malpractice lawsuits, rather than the overhaul sought by Obama and Democrats.

"There's a very big difference about whether or not it's appropriate to have a major rewrite of about one-sixth of our economy in the process," McConnell said. "My members just don't think that's the right way to go."

Addressing one of the most controversial issues in the health care debate, Obama repeated his opposition to providing health insurance or government subsidies for coverage to illegal immigrants. Republicans have said that Democratic proposals in Congress have loopholes that would allow illegal immigrants to get free coverage or funding, a charge that Obama and Democrats initially denied as misinformation.

The issue gained prominence after Rep. Joe Wilson, R-South Carolina, shouted "You lie!" at Obama during the president's September 9 address on health care to a joint session of Congress. Wilson, who was criticized by Democrats and Republicans and immediately apologized, was formally rebuked by the House of Representatives, but insists his action -- while inappropriate -- prompted Democrats to promise stronger enforcement sought by Republicans.

In the interview, Obama called for a "verification mechanism" similar to procedures for other social programs, calling it "a pretty straightforward principle that will be met."

He also said a compromise health care proposal coming before the Senate Finance Committee this week contains many of the provisions he is seeking in a final bill.

While the talks were intended to generate bipartisan support for a proposal, the three Republican negotiators have yet to support the plan unveiled by Baucus last week. Republicans say the proposal is too ambitious and expensive, even though it drops a government-run public health insurance option that they unanimously oppose.

The lack of a public option concerns liberal Democrats, who say the Baucus proposal will make required health insurance coverage too expensive for some of the low- and middle-income families it is intended to help.

Obama said in the interview that he also is concerned about ensuring that millions of Americans currently without coverage can afford a plan if required by law to get one.

Asked if he would sign the Baucus proposal as is, Obama refused to answer what he called a hypothetical question. He noted that the plan meets the broad goals he has set, such as prohibiting the denial of health coverage due to pre-existing conditions. The proposal also would not add to the federal deficit in the next 10 years while holding down the rise in health care costs, Obama said.

"[T]here are a whole bunch of details that still have to get worked out," Obama said. "But what I'll say is, is that right now I'm pleased that, basically, we've got 80 percent agreement, we've got to really work on that next 20 percent over the last few weeks."

In the health care debate, heated rhetoric has been flung in the president's direction. Obama rejected suggestions by some -- including former President Jimmy Carter -- that much of it is fueled by racism.

In the interview with CNN, Obama acknowledged that racism plays a role in some of the criticism against him but added that race is "not the overriding issue."

"I think there are people who are anti-government," the president said. "I think there's been a long-standing debate in this country that is usually that much more fierce during times of transition, or when presidents are trying to bring about big changes.

On foreign policy, Obama said it was too soon to decide whether more U.S. forces are needed in Afghanistan. "I don't want to put the resource question before the strategy question," Obama told King. "Because there is a natural inclination to say, if I get more, then I can do more. But right now, the question is, the first question is, are we doing the right thing? Are we pursuing the right strategy?"

The president said the answer to that important strategic question will come from his secretary of defense, his national security adviser, and commanders on the ground in Afghanistan, including Gen. Stanley McChrystal, the top U.S. commander in Afghanistan.

Obama is currently considering an assessment of troop levels done by McChrystal. The report is believed by some members of Congress to recommend additional troops be placed in the country. However, some influential Democrats on Capitol Hill have expressed reluctance to send more troops to Afghanistan.

"What I will say to the American public is, it's not going to be driven by the politics of the moment," Obama said. A proper strategy will provide "clear benchmarks" to set a "matrix of progress," the president said, noting that the original goal for Afghanistan was to "get al Qaeda, the people who killed 3,000 Americans," referring to the September 11, 2001, terrorist attacks.

Asked about North Korea, Obama said his administration has been successful so far in ratcheting up international diplomatic pressure.

"We have been able to hold together a coalition that includes the Chinese and the Russians to really apply some of the toughest sanctions we've seen, and it's having an impact," the president said.

"I think President Clinton's assessment was that [Kim is] pretty healthy and in control," the president said, "And that's important to know, because we don't have a lot of interaction with the North Koreans. And, you know, President Clinton had a chance to see him close up and have conversations with him.

With the U.S. government expected to begin a large-scale vaccination effort next month against the H1N1 flu virus, Obama said the first family will not get any special consideration compared to other Americans.

"Here's what I guarantee you," the president said. "We want to get vaccinated. We think it's the right thing to do. We will stand in line like everybody else. And when folks say it's our turn, that's when we'll get it."

The president said high-risk populations for the H1N1 virus -- like health care workers, pregnant women, and children -- will be first in line for vaccinations against the disease. So he speculated that his two daughters, who are both under the age of 12, would likely get vaccinated before him.

"I suspect that I may come fairly far down the line," Obama said.