Obama: Requiring health insurance is not a tax increase

WASHINGTON (CNN) -- President Obama insists that requiring Americans to get health insurance does not amount to a tax increase. 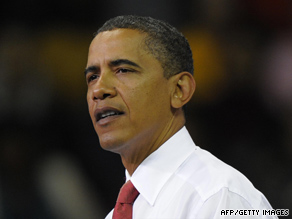 President Obama says requiring people to have health insurance is not the same as raising their taxes.

In a testy exchange on ABC's "This Week," broadcast Sunday, Obama rejected the assertion that forcing people to obtain coverage would violate his campaign pledge against raising taxes on middle-class Americans.

"For us to say you have to take responsibility to get health insurance is absolutely not a tax increase," Obama said in response to persistent questioning, later adding: "Nobody considers that a tax increase."

A proposal going before the Senate Finance Committee this week includes the mandate for health coverage. Obama has praised the plan in general, and indicated in the interview conducted Friday that he could back the coverage mandate.

He noted that consumers currently pay higher health insurance premiums due to the costs run up by hospitals and other facilities providing care to uninsured people.

Those unable to afford health insurance should get government help, Obama said, but others who can afford coverage but choose not to get it should face coverage requirements similar to those for auto insurance.

"What it's saying is ... that we're not going to have other people carrying your burdens for you any more than the fact that right now everybody in America, just about, has to get auto insurance," he said. "Nobody considers that a tax increase. People say to themselves, that is a fair way to make sure that, if you hit my car, that I'm not covering all the costs."

Asked again about critics calling the requirement to pay for health insurance a tax increase, Obama said: "My critics say everything is a tax increase."

On another aspect of his desired health care reform, Obama said cutting billions of dollars in government subsidies for Medicare Advantage would not reduce essential coverage for senior citizens in that program.

The government cites the proposed subsidy cut for Medicare Advantage -- an enhanced program within Medicare -- as an example of how it can reduce health care spending while expanding coverage to millions of uninsured Americans.

When pressed on that issue in the interview, Obama said Medicare Advantage provided essentially the same level of medical care as regular Medicare while costing the government much more due to the subsidies.

Insurance companies were "overcharging" for the service, Obama said, insisting that the change would mean senior citizens will get the same level of coverage at a lower cost to the government.

"Now, they package these things in ways that, in some cases, may make it more convenient for some consumers, but they're overcharging massively for it," Obama said. "There's no competitive bidding under the process."

He said people currently signed up for Medicare Advantage would still get regular Medicare coverage "and the same level of benefits, but they may not be having their insurer get a 14 percent premium."

"And will the insurers squawk? You bet," Obama said, rejecting claims that those enrolled in Medicare Advantage would be left with substandard benefits. "These folks are going to be able to get Medicare that is just as good, provides the same benefits, but we're not subsidizing them for $18 billion a year."

Republican response to Obama on Sunday called the president's promises of expanded health coverage at lower costs too good to be true.

"It's just not believable," said Michael Steele, the Republican National Committee chairman, on the CBS program "Face the Nation." No matter what Obama says, Steele added, "Taxes are going to go up for the middle class because they have to."

Sen. Lindsey Graham, R-South Carolina, said on the NBC program "Meet the Press" that Obama "is selling something that people quite frankly are not buying."

"This is not about tone -- this is about policy," Graham said.

Also appearing on the show, House Minority Leader John Boehner, R-Ohio, said health care reform as proposed by Obama and the Democrats was dead in Congress.

"At some point when these big government plans fail -- and it will, the Congress will not pass it -- it's really time for the president to hit the reset button," Boehner said.

For his part, Obama offered a different perspective on the Republican position, telling Univision in an interview broadcast Sunday that Republicans -- for political reasons -- "are just not going to support anything."