Michelle Obama could be secret weapon in health care reform

WASHINGTON (CNN) -- She stood by her husband throughout the contentious 2008 presidential campaign and during heated health care reform debates during his presidency. 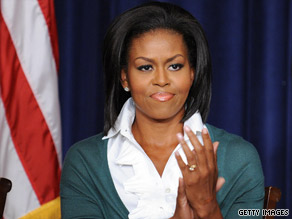 First lady Michelle Obama listens to remarks during a health care forum at the White House on Friday.

Now, as the debate is reaching a fever pitch, first lady Michelle Obama is weighing in on the issue by focusing on how health care can affect families.

"What she's doing is putting a personal and human face on the issue ... there's nothing more crucial," said Washington Post columnist Sally Quinn. "Everybody gets sick, and everybody has someone in the family that gets sick."

"I think if you can humanize it and personalize it, it suddenly brings it home to people -- especially those who are screaming and yelling about the government taking over," Quinn said.

On Friday, the first lady, a former hospital administrator, spoke about the issue to a crowd at the White House, highlighting her own family's experience with health care.

In one touching moment, Obama recalled when daughter Sasha exhibited signs of potentially deadly meningitis when she was 4 months old.

"We didn't know what, but he [the doctor] told us she could have meningitis, so we were terrified. He said get to the emergency room right away," she said. "Fortunately, things worked out."

"But it is that moment in our lives that flashes through my head every time we engage in this health insurance conversation. It's that moment in my life, because I think about what on earth would we have done if we had not had insurance."

Mrs. Obama not only faced the issue as a mother, but also as a daughter.

"My father has multiple sclerosis. He contracted it in his 20s. ... He was able to get up and go to work every day, even though it got harder for him as he got sicker and more debilitated. And I find myself thinking what would we had done as a family on the south side of Chicago if my father hadn't had insurance."

Quinn says that personal story is critical in the health care debate -- something that has been lacking in the president's message so far, which has often been deemed by pundits as too policy-oriented and too surgical in nature.

"What she's doing is she's humanizing the issue. And I think that has been missing in their [White House] campaign," she says. "He's been so focused on the details and the strategy and the money that the individual problems and issues have seemed to have gotten lost in the fray."

"I think she's always been a great asset to him," she said. "She can help in this health care debate by not getting involved in the minutiae of the bills, but essentially emphasizing the reason we need health care reform. And that's what she will stick to."

Michelle Obama was a lightning rod -- both good and bad -- throughout her husband's presidential campaign. Now, in her role as first lady, she has garnered greater support among American voters from both parties.

A national survey by the Pew Research Center for People and the Press in April found that the first lady's positive ratings have increased since her husband took office. The poll found that 76 percent of Americans had a favorable opinion of her, which is up from 68 percent in January.

"Much of the change has come among Republicans, especially Republican women," the organization noted. "About two-thirds of Republican women [67 percent] have a favorable impression of Michelle Obama, a gain of 21 points since January."

But a first lady's involvement in health care reform is nothing new.

In the early '90s, first lady Hillary Clinton spearheaded the Clinton administration's push for reform, holding meetings, testifying before congressional committees and, in general, taking charge of the issue.

As for whether Michelle Obama is mirroring Clinton's role, the answer from both Borger and Quinn is absolutely not.

"I don't see any parallels at all. ... The Clintons came in, and they had run on the platform of buy one, get one free, a co-presidency and all of that. And she took over this huge thing herself. Bill wasn't doing it," Quinn said.

She said the president, not Michelle Obama, was the was the one who pushed health care reform in his early domestic agenda.

"He promised in his campaign, and then he's the one that did it. This is not Michelle's plan. She hasn't been doing the town meetings and the national press conferences," she added.

Borger said that the first lady is playing a completely different role.

"It's a much more supportive role, and it's a role out of the policy arena, but more in the arena of just why we ought to think we need reform."