Medal of Honor recipient remembered as a selfless friend

RAYNHAM, Massachusetts (CNN) -- It's a crisp New England day and Paul Monti is sitting in the backyard garden he built to honor the memory of his son, sipping coffee from his favorite Boston Red Sox mug, and nursing what he calls a "morning cigar." 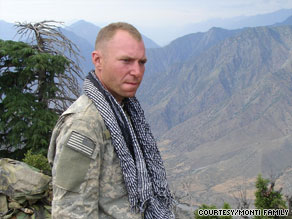 Sgt. Jared Monti always put others first, as a boy and as a soldier, his dad says.

These are daily rituals that help him deal with his son's death three years ago, while serving the U.S. Army in Afghanistan.

"I come out here and sit on the bench and sit in the flowers," says Monti, a retired schoolteacher. "This is where I get my solitude."

And that's when the stories start pouring out of this proud dad, stories about how Sgt. Jared Monti -- who was posthumously awarded the Medal of Honor by President Obama on Thursday -- always had the instinct to help other people.

There was the time that Jared was in high school and came home, to this house with the American flags flying on the porch, and asked his dad if he could cut down one of the spruce trees in the front yard. A single mom down the street in this tiny town outside Boston couldn't afford a Christmas tree, and Jared wanted to take care of her family for the holidays.

Watch more on the life and death of Sgt. Jared Monti »

Or the time that Jared was stationed at Fort Bragg in North Carolina, and chipped in with a roommate on a $500 dining set for their apartment off base. One day the roommate came home and was infuriated to find the furniture missing.

"He said, 'Jared, where's the kitchen set?' " recalls the dad. "Jared said, ' Well, I was at one of my soldiers' houses today and his kids were eating on the floor and they needed the kitchen set more than we did. So we're going to have to find another place to play quarters.' So that's the kind of thing he did."

But even that kind of generosity pales in comparison to what young Monti did on June 21, 2006, in the rugged northeast corner of Afghanistan near Pakistan. According to a Pentagon account and CNN interviews with soldiers who were there, Sgt. Monti was leading a small patrol that was ambushed by dozens of Taliban fighters.

As rocket propelled grenades flew past his head, Monti got on the radio to call for backup. Sgt. Clifford Baird was on the other end of the line.

"We could start hearing the RPGs and the small arms fire, and then that's when we started getting the calls over the radio to start giving them indirect fire support," says Sgt. Baird. "Just needed as much firepower as we could give them and as fast as we could give it. ... I would definitely say he was calm. Definitely knew how to stay calm under fire."

In between his calls for help, Monti was using his own rifle to engage the enemy. Suddenly he noticed that a young private named Brian Bradbury was badly wounded, unable to move, desperately exposed to enemy fire. Another sergeant said he would run out and try to save Bradbury, but Sgt. Derek James heard Monti say no.

"I remember him saying that Bradbury was his guy, so he was going to be the one to go get him back and bring him back to us," says James.

But with bullets flying, Monti had to take cover. He ran out a second time, but the enemy fire got more intense, so he stopped and yelled for help. Risking his life yet again, he then ran out a third time to try to save Bradbury.

"We knew he was going to get Bradbury -- then we all kind of heard him scream," recalls James.

Monti was mortally wounded and knew he was dying. So his family was in his final thoughts, which still touches his dad back in Massachusetts.

"He said the Lord's Prayer and he said, 'Tell my family I love them,' " recalls Paul Monti, struggling to control his emotions. "And that's about the most meaningful thing that there is. That he thought of us in his last moments."

Inspired, his squadron beat back the enemy, thanks in part to the backup that Monti had calmly called for earlier. But then there was a terrible twist.

A U.S. helicopter lowered a medic to grab Bradbury, the young private Monti had tried to save, in order to get him quickly to a hospital. As the two men were being raised into the air, a cable snapped. Bradbury and the medic plunged to their deaths.

Paul Monti says it's frustrating that U.S. troops have never had the proper resources in Afghanistan. But he insists his son did not die in vain. "He died doing what he felt he had to do," he says. "It didn't matter the end result because that was him. He just did what the soldier's creed says: 'You never leave a soldier behind.' "

When Jared Monti was just a young boy, the family traveled to Washington and stood outside the White House gates to pose for a photo. As they return Thursday to honor their fallen son, Paul Monti is going through a mix of emotions.

"It's wonderful meeting the president and it's wonderful having my son receiving the Medal of Honor, but I would give all of it up to have my son back -- everything," he says, next to a shrine in the living room with some of his son's personal effects, including his uniform. "There's nothing I wouldn't give. Even my own life to get my son back."