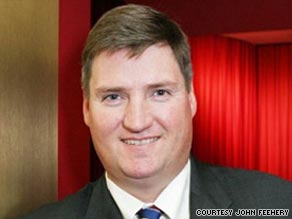 John Feehery says Republicans should try to stay ahead of the Tea Party, but not try to run it.

WASHINGTON (CNN) -- It is altogether ironic that the one person to have a Sam Adams beer at the infamous beer summit, hosted by the president, was Skip Gates, the Harvard professor whose arrest led to the summit.

Sam Adams was the key revolutionary figure in the Boston Tea Party of 1774, the spark that lit the American Revolution.

And now, 235 years later, Tea Parties have sprung up around the country as a reaction against the rule of President Obama and the Democratic Congress.

It is unlikely that Skip Gates will be spending any time addressing a Tea Party in his hometown of Boston any time soon.

And unlike the popular perception promoted by some in the media, the Tea Party is distinct from the Republican Party, probably as distinct as Sam Adams beer is from Bud Lite.

The Tea Party presents the first truly grass-roots threat to the ambitious agenda of President Obama. Largely misunderstood as anti-tax activists, and attacked by congressional Democrats as a collection of crazy right-wingers, the folks who go to Tea Parties are not concerned primarily with tax policy (although if the Democrats move to raise taxes on just about everybody, that could change).

Instead, they are mostly motivated by out-of-control spending, towering debt, and the pervasive feeling that government is too big, too powerful, too unaccountable and too cozy with Wall Street.

While the Tea Party movement presents a threat to the Obama administration, it also presents a challenge to congressional Republicans. After all, many of the protesters have as low a regard for the GOP as they do for the Democrats, and they hold the previous administration in as much as contempt as they do the Obama White House.

This is a populist movement made up of many strands, joined together only by a common resentment of Washington. Some of those strands, like the birther movement, are illegitimate and a waste of time. Others, though, like those who protest expanding government's role in health care or crushing debt, have legitimate concerns that need to be addressed. iReport.com: What are your thoughts on race and politics?

Republicans have two choices when it comes to a strategy of dealing with the Tea Party -- and here I am going to mix my metaphors, so excuse me. They can figuratively try to ride the movement as if it were a bucking bronco. That means trying to influence its leaders, condemning the more unpleasant actors, and inserting some discipline to the movement.

Or they can try to manage the stampede, riding along, gently guiding it toward the ultimate goal of the congressional elections, leading it with some good ideas, but doing their best not to get their own agenda trampled on.

Congressional Democrats and the Obama administration would love nothing more than to get Republicans to more closely identify with the Tea Party protesters. They will call on them to discipline the more radical among them. They will call the protesters racist, or homophobic, or right-wingers or fascists or worse. Jimmy Carter's doing it already -- he said Tuesday that racism is driving much of the animosity to Obama's presidency.

The Democrats will urge the GOP to ride the wild horse and hope that its leaders get thrown and then trampled.

But Republicans shouldn't be suckered into that position. Instead, they should seek to get ahead of the stampede by offering good ideas that will reform the government and bring back into balance the role of the government to the taxpayers.

They should focus on three important areas: transparency, accountability, and thrift.

Perhaps the biggest driver of the Tea Party movement was not the health care debate, but the bailout of Wall Street and the creation of the Troubled Assets Relief Program. That, coupled with the Federal Reserve Bank's mysterious pumping of trillions of dollars, has led to a variety of conspiracy theories, and worse, led to Middle America's complete loss of faith in the Washington-Wall Street industrial complex.

Transparency is the only way to restore faith in the process. Only by knowing exactly where the money has gone and why it went there will the taxpayers regain faith that the public's best interests are being served. But more transparency can help in other ways.

It can help us find out who is cheating us on Medicare reimbursements, why HUD grants are going to political cronies, and who is getting special appropriations for members of the family. Transparency will bring more reform to the way government operates than any other thing.

If you go into any government-run entity, from the local Social Security agency to the local DMV, you can see what happens when an employee is not accountable to the customer. It is actually quite easy to impose accountability to the governing process. Set benchmarks, including things like results, customer satisfaction, productivity -- and when an employee consistently underperforms, fire that person.

This is what happens in the private sector. Why can't it happen in the public sector? If the Department of Education is doing nothing to improve education in the country, why can't there be a mechanism to fire the bureaucrats? Making the government and its bureaucracy more accountable is something that every Tea Party attendee would support.

Finally, the president has talked a good game about the necessity of thrift, but lost credibility on the subject almost immediately. Remember when he asked his agency heads to find a hundred million dollars in budget savings, as he was spending hundreds of billions on an unpopular "stimulus" package?

Republicans needs to reclaim "thrift" as a political virtue. They lost it during the Bush years. But being cheap is making a comeback, especially with voters who have to make their own sacrifices in the face of a struggling economy.

By making proposals that track these three themes, the Republicans can get ahead of the stampede and help lead those who are so concerned about the future of America that they are joining their neighbors in protest.

The Tea Party combines the best elements of civic activism with some of the worst elements of fringe extremism. While most Tea Party activists are genuinely concerned about the future of the country, some others see conspiracies around every corner and use unacceptable rhetoric to communicate their displeasure with the president.

By leading with a reform platform, based on the concepts of transparency, accountability and thrift, Republicans can inspire the best of the Tea Party, find common cause with independent voters, and motivate traditional GOP supporters, giving themselves a chance to regain the trust of the American people, recapture the Congress, and provide a necessary check to the Obama White House.