WASHINGTON (CNN) -- Amtrak would lose its federal subsidies if it doesn't put a system in place by early next year to check and track firearms so that passengers can legally put the weapons in their checked baggage, the Senate voted Wednesday. 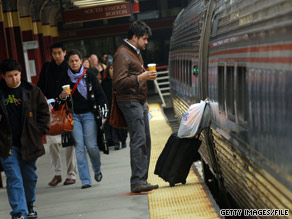 One senator says the measure "is going to put a severe burden" on Amtrak.

The measure, an amendment to the transportation and housing appropriations bill, passed 68-30.

The House version of the bill, passed in July, does not include the provision, so further steps would be needed for it to reach President Obama's desk.

Amtrak spokesman Steve Kulm said firearms had been allowed in checked baggage before the September 11 attacks.

However, despite the policy change, the company has no uniform system of screening for firearms, Amtrak Chairman Thomas Carper noted in a letter to Sens. Patty Murray and Christopher Bond decrying Wednesday's congressional mandate. They are the top Democrat and Republican, respectively, on the Appropriations Committee's transportation subcommittee.

"Unlike the airline industry, Amtrak has no system in place for a uniform system of screening for weapons," Carper wrote. The railroad has no secure loading areas, and trains make multiple stops, he said. Employees also would need intensive training.

Further, he said, the National Railroad Passenger Corp. (Amtrak) has neither the money nor the time to meet the Senate's timetable to put such a system in place.

Carper warned that if Amtrak were to lose federal funds, it would result in the "cessation of all Amtrak service nationwide."

According to its Web site, Amtrak has in place "a range of behind-the-scenes and front-line security measures" that include random passenger and carry-on baggage screening; checked baggage screening; K-9 units; onboard security checks; and identification checks.

"As part of our security strategy, randomly selected passengers and their baggage, handbags, backpacks or other personal items may be screened or inspected," it says.

"Passengers failing to consent to security procedures will be denied access to trains and refused carriage, and a refund will be offered."

The gun measure was sponsored by Sen. Roger Wicker, R-Mississippi.

He introduced the same legislation in August as part of the budget resolution, and it was approved with bipartisan support, but the provision was removed during final House-Senate negotiations.

"Under current practices, all of the American domestic airlines permit firearms in their checked luggage. Other American passenger railroads also allow checked firearms," Wicker said on the Senate floor Wednesday.

"Only the federally subsidized Amtrak prohibits law-abiding American citizens from exercising their Second Amendment rights in checked baggage," he said.

"In order to receive any federal funding under this amendment, Amtrak would have six months to build a process for checking and tracking firearms," she said.

"It would have to find the manpower necessary to screen and guard firearms, and it would have to purchase the equipment necessary. Now there is nothing in the underlying appropriations to pay for any of that. So this amendment is going to put a severe burden on them and if they do not comply, Amtrak will shut down."

The measure lays out the following guidelines:

• Before checking the bag or boarding the train, the passenger must declare that the firearm or pistol is in his or her bag and is unloaded.

• The firearm or pistol must be carried in a hard-sided container.

• The hard-sided container must be locked, and only the passenger has the combination or key.

All About Amtrak • U.S. Senate