LORDSTOWN, Ohio (CNN) -- President Obama took his economic recovery message on the road Tuesday, defending the controversial auto bailout during an appearance at a General Motors plant in the heart of the struggling Rust Belt. 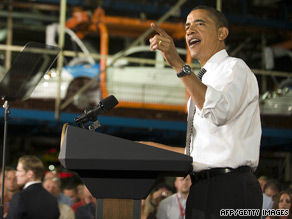 Obama also announced the official implementation of tighter auto fuel efficiency standards, a change that advocates herald as necessary to reduce dependence on foreign oil and to address climate change.

"In the midst of a deep recession and financial crisis, the collapse of the auto industry would have caused enormous damage to our economy," Obama told an enthusiastic crowd of autoworkers.

"So we intervened for one simple and compelling reason: Your survival and the success of our economy depended on it."

"I'm pleased to report that's exactly what's begun to happen at this plant and at others. And I'll tell you what: I will double down on the American people and all of you any day of the week," he said.

The department then agreed to give another $30 billion to GM and $8 billion to Chrysler to fund their operations during and immediately after the bankruptcy process, loans that it hopes will be repaid mostly through the sale of stock in both firms at some point in the future.

By paying for the rescue with funds from the Troubled Asset Relief Program originally set up to fix the nation's banking system last fall, the White House was able to reshape the auto industry without any congressional action.

The president said tighter auto emissions standards are also necessary for a long-term recovery in the auto industry.

A new national standard aimed at increasing gas mileage and decreasing greenhouse gas pollution "creates an even playing field," he said. "It's an action that is long overdue. It will give our auto companies clarity and stability and predictability."

The new requirements, initially unveiled in May, require the auto industry to make new vehicles that can average 35.5 miles per gallon by 2016.

The White House estimates that each new vehicle will cost an additional $1,300 to reach the 2016 standards but said the cost will be made up over three years.

Environmental Protection Agency Administrator Lisa Jackson said Tuesday that consumers should save $3,000 over the life of a car by getting better gas mileage.

CNN's Chris Isidore and Suzanne Malveaux contributed to this report.