WASHINGTON (CNN) -- Support for the war in Afghanistan is at an all-time low, according to a new national poll. 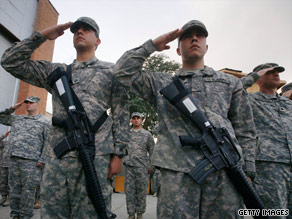 U.S. troops participate in a ceremony commemorating the eighth anniversary of 9/11 in Bagram, Afghanistan.

A CNN/Opinion Research Corp. survey released Tuesday morning indicates that 39 percent of Americans favor the war in Afghanistan, with 58 percent opposed to the mission.

Support is down from 53 percent in April, marking the lowest level since the start of the U.S. military mission in Afghanistan soon after the September 11, 2001, attacks.

The poll suggests that 23 percent of Democrats support the war. That number rises to 39 percent for independents and 62 percent for Republicans.

"Most of the recent erosion in support has come from within the GOP," said Keating Holland, CNN's polling director. "Unlike Democrats and independents, Republicans still favor the war, but their support has slipped eight points in just two weeks."

How does Afghanistan compares with Iraq?

"The Afghan war is almost as unpopular as the Iraq war has been for the past four years," Holland said, noting that support for the war in Iraq first dropped to 39 percent in June 2005 and has generally remained in the low to mid-30s since.

The poll's release comes after the two deadliest months for the U.S. military in Afghanistan. In August, 48 U.S. troops were killed in the fighting, surpassing the previous high of 45 the month before.

President Obama has called Afghanistan a "war of necessity" and has placed great emphasis on defeating the Taliban and al Qaeda militants operating there and in Pakistan.

Gates has concluded there is not enough manpower or equipment in Afghanistan to protect U.S. troops from such bombs, Morrell said.

Watch U.S. senators on the next U.S. moves in Afghanistan »

The CNN/Opinion Research poll was conducted Friday through Sunday, with 1,012 adult Americans questioned by telephone. The survey's overall sampling error is plus or minus 3 percentage points.

All About Afghanistan War • The Taliban • Robert Gates