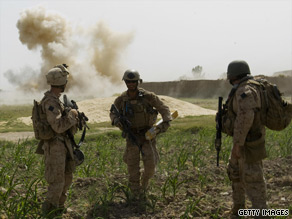 Marines detonate a roadside bomb. Injuries from the bombs have increased 700 percent in two years.

Over the past two weeks, Gates has concluded that there are not enough forces or equipment in Afghanistan to protect U.S. troops from the threat of roadside bombs, Morrell said.

The secretary, he said, wants to send these forces "as soon as possible."

Morrell said the deployment would be separate from any that might be requested by Gen. Stanley McChrystal.

The plan could send nearly 3,000 troops, another U.S. military official familiar with the proposal said.

He said Pentagon planners have already identified some of the units that would be sent. This official asked not to be identified because no final decision has been announced.

Plans have been in place to set the U.S. troop level in Afghanistan at 68,000 since earlier this year, when President Obama approved an additional 21,000 troops.

"I don't think there's a great deal of support for sending more troops to Afghanistan in the country or in Congress," Speaker of the House Nancy Pelosi, D-California, told reporters Thursday.

On Friday, Sen. Carl Levin, the head of the Senate Armed Services Committee who has recently returned from Afghanistan, said the emphasis should be on training and increasing the size of the Afghanistan army before considering more U.S. forces.

"Our primary goal should be to strengthen the Afghan army and the police, to provide the necessary training and equipment and also to see if we can't reintegrate some of the lower-level Taliban people, who are the young people who aren't the religious zealots but are being taken advantage of by the leaders," Levin, D-Michigan, told MSNBC.

Gates himself has been a vocal opponent of expanding the U.S. presence for fear that the forces would be seen as occupiers by the Afghan population.

But last week, he softened that position, saying McChrystal had made a persuasive argument that the concern should not be on the size of the forces but on their conduct.

Morrell said the proposal may not raise total U.S. troop strength above 68,000, because some of the units already scheduled to go could be sent not fully staffed or others already there could be sent home.

Still, "the secretary has already determined this is a requirement that needs to be fulfilled," Morrell said. "The forces there now require more IED protection."

The troops would specialize in route clearance, explosive ordnance disposal, medical treatment and intelligence-gathering, Morrell said. "We owe this to the troops already committed to the fight," he said.

Since 2007, the number of roadside bombs in Afghanistan has jumped 350 percent, according to the Defense Department. Though many are found before they detonate, the number of troops killed has increased by more than 400 percent and the number wounded is up more 700 percent over the last two years.

One U.S. military source told CNN that the Taliban's capacity to manufacture bombs, train attackers and target U.S. troops has grown over the past year.

On September 8 near Kandahar, troops seized five tons of ammonium nitrate, more than twice the amount used in the bombing of the federal building in Oklahoma City, Oklahoma, in 1995.

On August 27, C-4 plastic explosives were found in Herat by Afghan troops.

"You have disturbed earth all the time," said Gen. Montgomery Meigs, former head of the Department of Defense's IED Task Force. "Especially close to villages and close to intersections -- that just makes the seeing and finding, even by soldiers' eyes, a lot more complicated."

The Taliban have proven adept at adjusting their strategy as circumstances change. Seeing that troops were routinely stopping ahead of culverts to search for bombs that could be hidden under the roads, insurgents have started placing the bombs ahead of the culverts.