(CNN) -- A Southern California assemblyman resigned Wednesday after a recording of him whispering about sexual exploits to a colleague was made public. 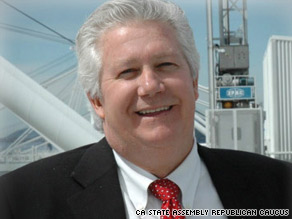 Assemblyman Mike Duvall said he was resigning so his actions didn't remain a distraction for colleagues.

Former Republican Assemblyman Mike Duvall was at an appropriations committee meeting in July when a microphone picked up his licentious conversation.

"I am deeply saddened that my inappropriate comments have become a major distraction for my colleagues in the Assembly, who are working hard on the very serious problems facing our state," Duvall said in a statement on his Web site that had been set up for his 2010 run for the Assembly. "I have come to the conclusion that it would not be fair to my family, my constituents or to my friends on both sides of the aisle to remain in office."

On video and audio footage from the California Channel, a television organization that tracks California governance, Duvall is heard laughing at times as he tells of an extramarital affair with a colleague's female staffer who is 18 years his junior. He said he likes spanking her.

He also mentions another woman, who his colleague said was "hot."

"I talked to her yesterday. She goes, so are we finished? No, we're not finished. And I go, but you know about the other one the other one doesn't know about you," Duvall said on the audio portion of the tape.

CNN affiliate KCAL-TV has reported that both women are lobbyists and that one works for a firm that represents a utilities company. Duvall was a member of the Assembly's Utilities and Commerce Committee and the Rules Committee, according to Assembly Speaker Karen Bass.

San Diego-based Sempra Energy said that it is "investigating this matter and the recent media reports that named one of our employees."

"The employee has denied the speculative media reports," the company said in a statement. "Our investigation will be conducted to ensure not only that our policies on employee conduct are strictly adhered to, but also that our employee is treated fairly."

Despite his resignation, the former representative of the 72nd assembly district may face further political turmoil for his apparent transgressions.

"In response to inquiries, the resignation does not remove the responsibility of the Assembly Ethics Committee from reviewing the matter," said Bass in a statement.

According to the California State Assembly Web site, Duvall served two terms as an assemblyman, beginning in 2006. He is a former city councilman of Yorba Linda, California, which is about 40 miles east of Los Angeles. Duvall and his wife have two children, according to the Web site.

All About California • Yorba Linda