Obama about to pull the 'trigger' on health care?

WASHINGTON (CNN) -- President Obama's speech to Congress Wednesday on health care reform will probably be one of the high-noon moments of his presidency. 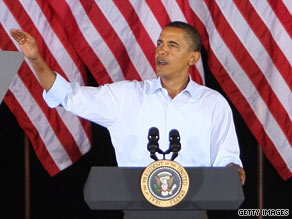 President Obama has faced pushback from members of his party on a public health care option.

Surrounded by liberals demanding a government-run public option and centrist Democrats -- along with Republicans -- who want to dump the option, Obama just might have his finger on something that can get him through this health care showdown: the "trigger" option.

A public option is a government-funded, government-run health care option, similar to Medicare. Under the plan, people would pay premiums 10 to 20 percent less than private insurance.

But the question remains about whether Obama will side with liberals in making a strong play for the public option. Though he has voiced his support, he has signaled over the past months that it's not the only option that could work.

"I continue to believe that a public option within that basket of insurance choices would help improve quality and bring down costs," Obama said Monday.

One of the bipartisan "Gang of Six" on the Senate Finance Committee, Sen. Olympia Snowe, R-Maine, has been actively negotiating with the White House.

The six met Tuesday to consider a plan by Senate Finance Committee Chairman Max Baucus, D-Montana, to drop the public option and tax the priciest insurance plans. The plan would also take a look at using health care co-ops.

"If [co-ops are] going to end up just the way we've known co-ops for 150 years in America, the answer is 'yes,' because they're consumer-driven, and all the consumers benefit from it," Sen. Chuck Grassley, a Republican on the Finance Committee, said on CNN's "American Morning" on Tuesday. "They're organized by members. There's no federal government running the co-ops."

Snowe has been pushing the idea of a safety net, or "trigger," for a public health care option as part of a key compromise. A source familiar with her negotiations with Obama said that's one of the things they're talking about.

Watch more on the trigger plan »

Throughout the health care debate, Snowe has shied away from radical changes to the nation's private insurance system.

The trigger idea is backed by a former GOP leader.

"We recommend that after about five years, if the insurance companies don't clean up their acts, then there's sort of a trigger where certain things happen, and we think that's a step in the right direction," said former Senate Majority Leader Bob Dole, a Republican from Kansas.

Even though Snowe's trigger could win over Senate centrists, like Nebraska Democrat Ben Nelson, congressional liberals have said in no uncertain terms: no public option, no deal.

"I say there is no option but a public option," Sen. Barbara Mikulski, D-Maryland, said in June. "For those who say we need a trigger, I say, 'be careful; you could be shooting down health care.' "

House Speaker Nancy Pelosi, D-California, has said throughout the health care debate that a public option is pivotal to passing health care reform, a point she reiterated last week.

"Any real change requires the inclusion of a strong public option to promote competition and bring down costs," she said in a news release. "If a vigorous public option is not included, it would be a major victory for the health insurance industry."

Pelosi predicted that any bill without a strong public option will not pass the House.

"Eliminating the public option would be a major victory for the insurance companies who have rationed care, increased premiums and denied coverage," she said.

But on Tuesday, one of the more outspoken members of the fiscally conservative "Blue Dog" Democrats said he will oppose any bill that includes the option.

Analysts wonder whether, in the end, Democrats will harm themselves politically.

"What a politician says in September and what they do in November or December are often two different things," said Larry Sabato, director of the University of Virginia Center for Politics. "Because they come to terms with reality."

And the reality is, the trigger might be the last best hope of getting a few Republicans on board. Still, liberals argue that the trigger gives the insurance industry another pass.

But after those rowdy town halls in August, a bipartisan health care deal may be out the window.