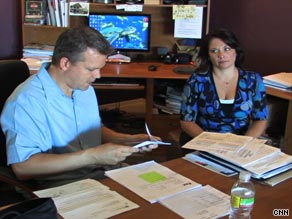 When the recession hit, the Arizona couple's income plummeted. They tried everything they could think of to hold on to their house: They drained their savings account, sold their 401(k), changed jobs.

It wasn't enough, and foreclosure is set to begin in a week.

The Kollars thought they had one last hope: the Making Home Affordable program, which should have reduced their monthly mortgage to affordable payments. In theory, it'd be a win-win: The Kollars and their two children keep their home, and the nation avoids one more foreclosure.

The problem? The bank hasn't been playing along, and the Kollars have no place to turn.

"I don't want a handout. I want to do the right thing," Mark Kollar said. "I thought this was supposed to give us a chance."

A CNN investigation revealed that the Kollars are far from alone. Housing counselors, homeowners and consumer advocates tell endless stories of banks giving homeowners the runaround: declining apparently eligible applicants; pressuring them into loans they can't afford; placing homes in foreclosure while the owners are being considered for a modified loan; lenders telling homeowners to waive their legal rights, even though the program prohibits it; or banks telling homeowners that they have to be in default to qualify, which isn't true.

Watch more about how the program has worked so far »

According to the Treasury Department's most recent report, only 230,000 of the up to 4 million eligible homeowners have new mortgages under the program.

Treasury Secretary Timothy Geithner has told bankers that he's not happy with the pace. Banks say that it took 90 days to get the program's rules and procedures and that they're still training staff members to handle it.

The most common complaint from those applying for help: banks losing paperwork or dropping calls while the foreclosure clock is ticking.

Mark Kollar can testify to that.

Since receiving his Making Home Affordable offer, he's spent hours trying to reach someone at his bank who can help. A number of representatives told him that this is his only offer; accept it or lose his house.

After insisting on speaking to a supervisor, he was eventually told to resubmit the documentation he'd been submitting for months.

In return for billions of dollars from the government to help banks recover from bad loans, the banks are supposed to help homeowners make their mortgage payments more affordable. As President Obama said unveiling the program in March, helping "responsible folks who have been making their payments" because it will "leave money in their pockets and leave them more secure in their homes."

Under the Making Home Affordable formula, the Kollars' payment should have been reduced to 31 percent of their $3,000-a-month income.

Bank of America, which holds the Kollars' loan, says the offer it made was based on incorrect information from a government-approved housing counselor.

Bank of America spokesman Rick Simon said it's difficult to determine what the Kollars should pay because Mark Kollar recently started a commission-based job, and his monthly income fluctuates.

The bank plans to watch his earnings for a few more months before it moves ahead "with consideration of a trial modification offer." Simon said the bank is offering the Kollars a temporary new mortgage payment while it watches their earnings.

"Bank of America is committed to the success of the Making Home Affordable program and helping homeowners avoid foreclosure whenever a borrower has the ability to make a reasonable mortgage payment," Simon said.

By one measure, the Kollars are more fortunate than others in the same predicament; the bank hasn't sold their house out from under them. Beth Goodell, a lawyer with the nonprofit Community Legal Services of Philadelphia, says she's seen that happen.

"Its outrageous," said Goodell, who represents low-income families in foreclosure. "It has to be clearer that foreclosure should stop altogether while people are being considered."

She says the only outlet for these homeowners is the courts.

An official with the Treasury Department said that "in all identified instances where loans have been denied to eligible borrowers, the administration has worked with servicers to correct the problem and provide modifications."

And Michael Barr, the Treasury Department's assistant secretary for financial institutions, says the program is "off to a strong start." He admits that "servicer performance has been uneven" but believes that the lenders are on track to make improvements. And he vows that the administration "will hold these institutions accountable for their progress."

But Goodell has seen plenty go wrong, and she said, "There's not adequate recourse."

Frustrated with the bank, Angela Baca-Kollar called the Obama administration's helpline, 1-888-995-HOPE, but the representative told her that the hot line "can't strong-arm the bank" and urged her to call a government-approved housing counselor.

The Kollars had been working with such a counselor for months.

"There is nowhere to go," Angela Baca-Kollar said.

All About Barack Obama • U.S. Department of the Treasury