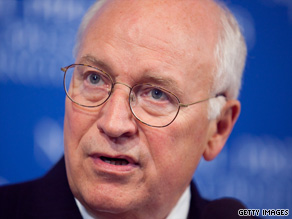 Cheney made clear in the interview, conducted Friday, that he believes that President Obama directed Holder to launch the review in response to pressure from left-wing Democrats.

But the administration official, who asked not to be identified, said, "the attorney general made a determination independently, based on the facts and the law."

The official also objected to Cheney's statement that "the president is the chief law enforcement officer in the land."

"That's not true," the official replied. "It's the attorney general."

During his Fox interview, Cheney repeated his defense of the effectiveness of what are called enhanced interrogation techniques, such as waterboarding.

In response, the official noted that a recently released 2004 report from the CIA's inspector general concluded that "the effectiveness of the enhanced interrogation techniques are hard to measure."

The official highlighted a page from the report stating, among other things, that "measuring the effectiveness of EITs, however, is a ... subjective process and not without some concern."

The official also noted a separate conclusion in the report that "the effectiveness of particular interrogation techniques in eliciting information that might not otherwise have been obtained cannot be so easily measured."

The official also took issue with Cheney's assertion that a new interagency group tasked with overseeing terrorist interrogators will spend the bulk of its time deciding "who gets to ask what question and who's going to mirandize the witness."

"Mirandizing" refers to the process of informing an individual of his or her rights under the U.S. Supreme Court's 1966 Miranda ruling.

The primary goal of the High Value Detainee Interrogation Group will be intelligence collection, not law enforcement, the official said.

The group will be based out of the Federal Bureau of Investigation, which, according to the official, currently mirandizes less than 1 percent of detainees.

"That will be the same practice" with the new group, the official asserted.

All About Dick Cheney • Terrorism