(CNN) -- President Obama hailed Sen. Edward M. Kennedy as "a champion for those who had none, the soul of the Democratic Party and the lion of the U.S. Senate" at a funeral Mass for the late lawmaker Saturday. 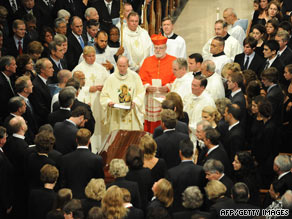 The funeral for Sen. Ted Kennedy is held Saturday at Our Lady of Perpetual Help Basilica in Boston.

A virtual who's who of American politics gathered to pay respects to Kennedy at Our Lady of Perpetual Help Basilica in the Mission Hill section of Boston, Massachusetts.

Former Presidents Carter, Clinton and George W. Bush were among the dignitaries who attended.

The senator's widow, Vicki, accepted condolences from Obama and the former presidents in turn before communion.

Kennedy was to be buried later Saturday at Arlington National Cemetery outside Washington.

Kennedy, the patriarch of the first family of Democratic politics, died Tuesday night after a 15-month battle with brain cancer. He was 77.

Kennedy was the younger brother of the late President Kennedy and Sen. Robert Kennedy of New York.

His presidential aspirations were hobbled by the controversy around a 1969 auto accident that left a young woman dead, and a 1980 primary challenge to Carter that ended in defeat.

The longtime senator from Massachusetts was considered one of the most effective legislators of the past few decades. Kennedy was an outspoken liberal standard-bearer during an era of conservatism.