(CNN) -- For the first time in more than 60 years, America is without a Kennedy on the national stage and it's more than just a sentimental loss to President Barack Obama. 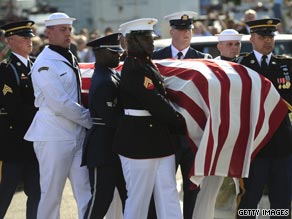 The coffin of Senator Edward Kennedy is carried by an honor guard.

The last of the Kennedy brothers, Senator Edward Kennedy, died this week of brain cancer at age 77.

"We shouldn't underplay the adverse effect this has on the president's healthcare fight," said Democratic strategist James Carville.

Kennedy was the youngest of four brothers, the only one who died peacefully.

John F. Kennedy, was elected to Congress in 1947, then the White House in 1960 and assassinated in 1963. Brother Robert was running for president when he assassinated in 1968. Their eldest brother, Joe, was killed years earlier in World War II.

There are too many surviving children and relatives to count. A few have been in public life, but none of them fully profits from the family's nearly mythical place in the American imagination.

Edward Kennedy diminished his own share of that inheritance. He had a well-known fondness for drink in his early years and in 1969, he drove off a bridge with a young woman in the passenger seat. He swam to safety; she drowned.

Kennedy persevered and went on to a 47-year career as a prominent and productive member of the Senate. His early endorsement of Barack Obama helped Obama win the White House.

After the victory, the new president needed his help for something more. For decades, Kennedy was an ardent advocate of reforming the U.S. healthcare system. Obama has made it the centerpiece of his administration.

But support for the plan is slumping across the country and in Congress as well. The rules of the Senate normally require 60 votes to pass legislation without impediment from the opposition. Now the Democrats are down to 59.

"The White House is worried about getting 60 votes," said CNN analyst Gloria Borger. "He was very important to healthcare reform in many respects, not least of which was his vote."

Already some Democrats are saying that his death could actually help win the reforms he wanted. They see him still as an ally in the effort, absent but inspiring. Can the Democrats fill the hole left by Edward Kennedy's death? Sound off below

But the president needed his respected voice, his veteran's skill at negotiating a deal and, of course his vote. Obama will miss him.

All About Barack Obama • Healthcare Issues