(CNN) -- The story of the late Massachusetts Sen. Edward Kennedy is a very American story -- a very human one -- that splits the public. 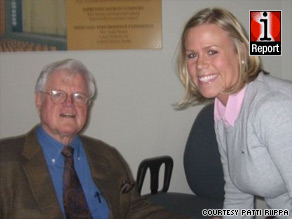 Patti Riippa met her political idol, Ted Kennedy, at a book signing. "I'll never forget that twinkle in his eye," she said.

iReporter Kevin Camp grew up in an anti-Ted Kennedy household, where the "very name Ted Kennedy was a profanity." His conservative father always had something bad to say about Kennedy, who served more than 40 years in the Senate.

"I grew up in a family that had a very antagonistic opinion of the man. As I became more liberal, my viewpoint changed quite a bit," Camp said. From reading voraciously and talking to a lot of people with different views, Camp said he changed. He began to see things more objectively.

The American public has long been polarized in its opinions of the staunch liberal who championed health care and immigration reform, among many other causes. He stood in the limelight as the patriarch of the powerful Kennedy family, becoming more than just John F. Kennedy's little brother. iReport.com: Changed views on Kennedy

Reactions to his death on iReport.com vary from those who spoke of his warm personality and political legacy to those who criticized his life.

Patti Riippa said she had the privilege of meeting Kennedy at a book signing in December 2007. The self-declared political nerd has looked up to the "Lion of the Senate" her whole adult life.

"When I met him, I was overwhelmed with emotion and started gushing -- thanking the senator for his lifetime of public service and telling him that he's the reason I studied political science," she said.

Riippa, a communications director for a nonprofit health care organization, remembers how Kennedy smiled modestly, touched her arm and thanked her for her work. "I'll never forget that twinkle in his eye," she said.

Stay with CNN and CNN.com/live for continuing coverage of the life and death of Sen. Ted Kennedy. Memorial services will be at 4 p.m. ET on Friday, and his funeral will be at 10 a.m. ET on Saturday.

People choose which moments of Kennedy's life they'd like to remember. Some think of personal controversies, like the Chappaquiddick incident, when Kennedy drove his car off a bridge and his young female passenger died. Others think of his political legacy, such as the more than 300 bills enacted into law that Kennedy and his staff wrote.

See a timeline of Kennedy's life »

"I look at the vast amount of good that he did, but I also understand how his personal demons affected the way that people perceived him, particularly on the right," Camp said.

For all the positive comments on iReport.com, at least a dozen people posted negative responses. iReporters clashed on their views of Kennedy's legacy, creating a spirited conversation.

iReporter maree thinks Kennedy was partisan and self-serving, and should "never have been allowed to stay in the Senate for as long as he did," she said on iReport.com. She, like several other iReporters, felt the Chappaquiddick incident should not have been forgotten. iReport.com: One more politician out of office

The debate extended to CNN.com, where Bart Hawkins commented that while Kennedy played a large role in U.S. history, he did so "against a backdrop of monetary influence and protection that few others have enjoyed." Kennedy's privileged background shielded him from the repercussions of some of his choices, he said.

"I shall mourn Mr. Kennedy -- simply because he gave us all something and someone to aspire to. Absolute power, corrupt absolutely."

Standing on the other side of the spectrum, Jimmy Deol of Toronto, Ontario, said he firmly believes Kennedy stood for what he believed in, and he did his best to follow through.

"Even though he was a symbol of American liberalism in politics and was a punching bag for the hard right for decades, people actually respected him because he stood for something," Deol said.

Not many politicians today can measure up to Kennedy, at least in Deol's mind. He said few today have the "skill and will" to accomplish legislation that affects people's real lives.

Deol and another iReporter, Adriana Maxwell, agreed that Kennedy reached across the aisle to help pass legislation. The senator not only worked within his party, but he also asked for the help of Republicans and independents, Maxwell said.

"This is his best lesson, this is his legacy. By working together, we can accomplish great things," Maxwell said.

Dale Hall experienced Kennedy's work first-hand, when he got to meet the senator in 1999. Kennedy was working hard to pass the Employment Non-Discrimination Act and a hate crimes bill. iReport.com: The day I met Ted Kennedy

Kennedy stuck his hand out and said, "I'm sorry for your story, but thank you so much for all the work you are doing. Keep it up."

Hall was touched by the apology and it seemed as if Kennedy felt some personal responsibility, he said. It was a day Hall will always remember.

Kennedy, like anyone else, was a man defined by shades of gray. Camp has mixed emotions about Kennedy's legacy.

Kennedy's life was full of contradictions and self-destruction, yet full of success, Camp said. "His life was a jumble of high achievements, personal tragedy and embarrassing flaws of character."

CNN's Henry Hanks and Andreas Preuss contributed to this report.