Kennedy takes with him a time and an era

WASHINGTON (CNN) -- He had a name that rang down through generations. 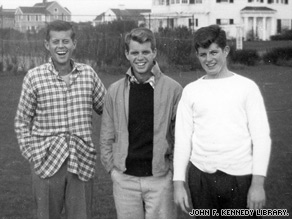 It was a gilded name in politics, but Ted Kennedy's life was an almost impossible kaleidoscope of outstanding public service, astonishing personal failures and the heavy burden of the unfulfilled legacies and promise of three older brothers: Joseph, Jack and Bobby.

"It reminds me, there's a great quote by Ernest Hemingway, who said, 'Everyone is broken by life, but afterwards, some are stronger in the broken places,' " presidential historian Doris Kearns Goodwin said.

Ted, the youngest of the Kennedys, became the patriarch of the family at 36 when Bobby -- whose 1968 presidential campaign championed the sick, the poor and the elderly -- was assassinated.

"Those of us who loved him, and who take him to his rest today, pray that what he was to us and what he wished for others will some day come to pass for all the world," Kennedy said in the eulogy at his brother's funeral.

In the four decades since that day, the Kennedy legacy was Ted Kennedy's to fulfill, and his to write.

Watch more about Kennedy and the end of Camelot »

CNN covers the life and death of Sen. Ted Kennedy, including the memorial Friday night and the funeral Saturday.
CNN and CNN.com; Fri.-Sat.

It's an imperfect story of an often reckless young man who lived hard and as a U.S. senator drove a car off a bridge after a party, killing a young campaign aide.

He would never be president. The dream of Camelot -- as Jackie Kennedy once described her husband's brief presidency -- was over the night Kennedy conceded the primaries to President Jimmy Carter.

"For all those whose cares have been our concern, the work goes on. The cause endures. The hope still lives, and the dream shall never die," he said in his keynote address at the 1980 Democratic National Convention.

So Kennedy returned to the Senate, and over the next 30 years he grew older, wiser and greatly admired.

In the Senate was redemption. In the Senate, the dream came alive. In the Senate early in the morning, late at night, Ted Kennedy fought and cut deals for minimum wage increases, health care, education, immigration reform, and help for the poor, the elderly and the sick.

"There are millions of people who counted on this guy every day to stand up for them. And for decades to come, history will talk about his legislative accomplishments and the difference he made in public policy," said Sen. Chris Dodd, D-Connecticut.

Even before Kennedy's death, colleagues on the right and left mourned his absence in the health care debate. Now they feel it acutely.

Eventually, someone will fill the Senate seat of Edward Moore Kennedy, but there's pretty much universal agreement that nobody -- family or friend -- can take his place. A man has passed, taking with him a time and an era.

The Kennedy legacy is written.