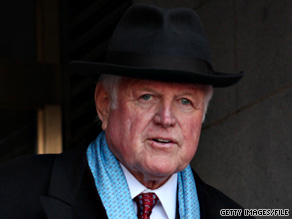 PRINCETON, New Jersey (CNN) -- In one of the funniest scenes in the film "The Big Lebowski," the hot-headed Vietnam veteran Walter Sobchak, played by John Goodman, explains to the Dude, played by Jeff Bridges, how much he hates nihilists because they don't believe in anything, they have no "ethos."

Unfortunately, many Americans share these sentiments about our politicians. Too often, the political system seems biased toward elected officials who only care about re-election. Politicians are eager to please interest groups who contribute to their campaign funds and activist organizations who will deliver the vote.

Americans suspect that a majority of politicians are willing to switch their position on any given day, depending on which way the political winds are blowing. Everyone, we sometimes fear, is a flip-flopper.

This was certainly not the case with Sen. Edward "Ted" Kennedy. He was a refreshing presence in Washington for many Americans, even those on the right who hated the political ideas that he championed. Love him or hate him, as Walter Sobchak might say, at least Kennedy stood for something.

Since his election to the Senate in 1962, Kennedy was a steadfast champion of modern liberalism. Throughout the 1960s, Kennedy pushed for civil rights legislation and immigration liberalization. In the aftermath of Watergate in 1974, Kennedy was one of the most vocal supporters of the campaign finance legislation that introduced public funds and contribution limits into the process.

When Democrats moved to the center, Kennedy was always there to remind them of what they were leaving behind. In the 1980 Democratic primaries, he challenged President Carter on the grounds that he had abandoned liberals on issues such as health care.

In a stirring speech at the 1980 Democratic National Convention, Kennedy told delegates, "The commitment I seek is not to outworn views but to old values that will never wear out. Programs may sometimes become obsolete, but the ideal of fairness always endures. Circumstances may change, but the work of compassion must continue.

"It is surely correct that we cannot solve problems by throwing money at them, but it is also correct that we dare not throw out our national problems onto a scrap heap of inattention and indifference. The poor may be out of political fashion, but they are not without human needs. The middle class may be angry, but they have not lost the dream that all Americans can advance together." The crowd gave him a standing ovation. Madison Square Garden was filled with chants of "Ted-dy!"

Nor did Kennedy become timid when Ronald Reagan was in the White House. He was the voice of liberalism in the age of conservatism. The senator remained at the forefront of the Democratic opposition to the administration even when liberalism was no longer cool.

When Bill Clinton and a group of Democrats formed the Democratic Leadership Council to push the party toward the center, Kennedy refused to budge. He was a key ally of the nuclear freeze movement, which placed immense pressure on the White House to enter into arms negotiations with the Soviets and to cool down the vitriolic rhetoric that President Reagan used in his first years.

When Reagan nominated Robert Bork to serve on the U.S. Supreme Court, Kennedy spearheaded the opposition on ideological grounds. He rejected Bork's conservative philosophy, warning that it posed dangers to the country.

Without question, Kennedy has been the single biggest legislative champion of health care reform since the 1960s. Kennedy has continued to push for a single-payer system, criticizing Democrats, including President Clinton, who abandoned that goal.

To be sure, Kennedy's career was scarred by his personal life. Worst of all, Kennedy was involved in a horrible accident in 1969. Early on July 18, 1969, Kennedy drove his car off a bridge on Chappaquiddick Island in Massachusetts and his passenger, Mary Jo Kopechne, drowned. Kennedy escaped but did not tell police about the incident until the next morning.

Although Kennedy claimed that he immediately went to seek assistance, the media discovered this to be false. Kennedy's travails received massive coverage. The accident dashed any hope that he had of successfully running for president.

But in his public life, Kennedy was the kind of politician who seems absent from modern politics, one who was loyal to an ideological outlook -- an ethos, as Sobchak would say -- and who devoted his career toward fighting for that cause.

Many Democrats loved Kennedy for the same reason that some Republicans hated him -- he was a true believer in a political system that privileges compromise and the abandonment of principle. Kennedy was not that kind of politician and, for many Americans, that meant a lot.