(CNN) -- The Department of Veterans Affairs said Wednesday it will apologize to veterans who were mistakenly told they'd been diagnosed with a fatal neurological condition. 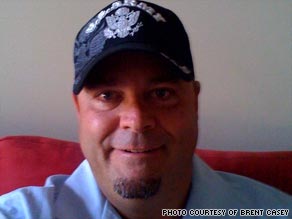 Brent Casey said went into a "meltdown" when he got a letter from the VA saying, erroneously, that he had ALS.

Letters were sent August 13 to 1,864 veterans and survivors, the VA said in a written statement. They were supposed to be sent to veterans with ALS -- also known as Lou Gehrig's disease -- to keep them apprised of expanding benefits eligibility.

"According to the records of the Department of Veterans Affairs (VA), you have a diagnosis of amyotrophic lateral sclerosis (ALS)," said the letter, according to the National Gulf War Resource Center. "This letter tells you about VA disability compensation benefits that may be available to you."

But some who received the letters, like Brent Casey, do not have ALS. Casey, a disabled Army veteran from the first Gulf War, told CNN that when he received the letter, he was "just completely beside myself. Just floored. Went into a complete and total meltdown. I couldn't speak, couldn't -- I guess I was, truthfully, speechless."

The VA said issued a statement saying it made "a coding error, and a number of veterans who should not have received this letter did."

An estimated one-third of the letters -- more than 600 -- were sent erroneously, a department official familiar with the program told CNN.

After hearing from veterans who received the letter but do not have ALS, the VA immediately began reviewing individual claims files for all the recipients to determine who received the letter by mistake, agency spokeswoman Katie Roberts said in the statement. "VA employees are personally contacting these individuals to ensure they understand the letter should not be confused with a medical diagnosis of ALS, explain why they mistakenly received the letter and express VA's sincere apologies for the distress caused by this unfortunate and regrettable error."

"It's not right for it to happen this way," Casey said. "Regardless if it was the case that I was diagnosed with ALS, that would be the worst possible way for an organization to let an individual know."

Upon receiving the letter, some veterans sought a second opinion outside the VA, according to veterans' service organizations, paying for doctors' consultations out of their own pockets. The VA said it will reimburse those veterans for the costs.

In addition, the VA said it is reviewing its notification process to make sure a similar error doesn't happen again.

The AmVets service organization is "encouraged" by the VA's response to the situation, and pleased to see they caught the error, said spokesman Ryan Gallucci.