(CNN) -- South Carolina Gov. Mark Sanford forcefully rejected his lieutenant governor's request that he resign for the good of the state Wednesday. 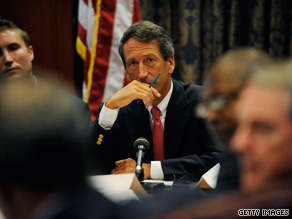 "I am not going to be railroaded out of this office by political opponents or folks that were never fans of mine in the first place," Sanford told reporters.

The governor called a news conference to respond to Lt. Gov. Andre Bauer, who said earlier in the day "that the best interests of the people of South Carolina can no longer be served by the current administration." Bauer also promised voters that if Sanford resigns and he assumes the governorship, he will not go through with his long-held plans to enter the 2010 governor's race.

But Sanford dismissed Bauer's offer -- made formally in a letter sent to Sanford's office -- and accused Bauer and other critics of cynically trying to exploit his weakened political position after recent investigations into his travel expenses.

"A lot of what's going on is pure politics, plain and simple," he said.

Bauer and Sanford were elected separately to their offices, and they are not politically or personally close.

Sanford sarcastically said that while "it would represent heaven on earth" to take Bauer up on his offer, he'd rather focus on solving the state's problems for the remainder of his term.

The governor, whose office sits just feet from Bauer's in the state House, responded to his No. 2 with his own sharply worded letter. "I most humbly decline your offer," Sanford wrote, "but thank you for it nonetheless."

The embattled governor said that most South Carolinians have moved on from his admission in June that he had an extramarital affair with an Argentine woman, a disclosure that sparked investigations into his use of state resources. But Sanford said that political rivals continue to stir up controversy for "payback" and that the media keeps covering the story "because it helps sell papers."

House Republicans are meeting this weekend in Myrtle Beach, South Carolina, for their annual retreat, and the topic of impeachment is likely to dominate the agenda, according to those planning to attend. Members of the House Judiciary Committee have told CNN there are enough votes on the committee to send an impeachment motion to the floor of the House.

The power of impeachment in South Carolina, according to the state constitution, is reserved for "cases of serious crimes or serious misconduct in office."

On Tuesday, Rep. Nathan Ballentine, a Sanford ally in the Legislature, met with the governor privately and warned him that unless he steps down, House Republicans are likely to impeach him. Sanford rejected his plea.

"Barring some swing of momentum in his favor, I told him the writing is on the wall," Ballentine told CNN.

Sanford has said he and his family were working on healing after his admission of the affair. His wife, Jenny, and the couple's four sons recently moved out of the governor's mansion and back to their private home in Charleston for the beginning of the school year.

All About Mark Sanford • U.S. House Committee on the Judiciary • South Carolina