(CNN) -- California legislators plan to keep trying to find consensus on a controversial proposal that would release at least 27,000 inmates from state prisons. 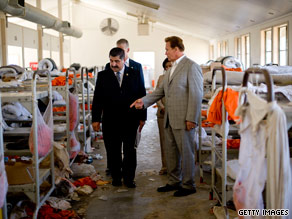 California Gov. Arnold Schwarzenegger, right, and officials tour a prison last week in Chino after a riot there.

The California Assembly on Monday delayed a possible vote on the plan. Lawmakers likely will take up the proposal Wednesday or Thursday, said Shannon Murphy, a spokeswoman for Assembly Speaker Karen Bass.

"When we arrive at a responsible plan that can earn the support of the majority of the Assembly and make sense to the people of California, we will take that bill up on the Assembly floor," Bass, a Los Angeles Democrat, said in a statement.

Bass said legislators continue to meet with each other and law enforcement authorities to try to craft a plan that increases public safety, improves the state corrections department and reduces costs.

As part of the negotiations, a provision that would set up a 16-member sentencing commission -- which would put new sentencing guidelines in place by 2012 -- was stripped from the bill, Murphy said.

But "it's not as if we're giving up on that notion," she said. The sentencing commission is a priority for Bass, she said, but the speaker believes she will have more success if she introduces a separate bill to create it.

A panel of three federal judges has ordered California to reduce its prison population by about 40,000 by mid-September. The judges acted on the grounds that overcrowded prisons violate inmates' constitutional rights.

The state Senate voted 21-19 Friday to release several thousand inmates early. That vote came after Senate President Pro Tem Darrell Steinberg, a Sacramento Democrat, assured senators the public would be protected from the most violent offenders.

"Of course, we want to keep violent criminals off our streets and out of our communities, and this reform package is a necessary step to do that because it concentrates our incarceration efforts on the violent criminals and ensures that nonviolent offenders have more contact with parole officers," Steinberg said Friday.

All 15 Senate Republicans voted against the bill, arguing that it undermines public safety. Democrats control both houses of the California Legislature.

"California's prison system is in a state of crisis," Gov. Arnold Schwarzenegger said last week while touring the California Institution for Men in Chino.

Some 250 inmates were injured this month at the facility in a riot that officials said was ignited by racial tension. Fifty-five inmates were taken to hospitals with serious injuries, including stab wounds and head trauma.

Schwarzenegger said the riot was "a terrible symptom of a much larger problem. ... Our prisons are overcrowded and endangering the staff and the inmates."

The governor noted he had signed a budget that mandates $1.2 billion in cuts to the state corrections system. "We must be measured and smart about how we go about and create those reductions," said Schwarzenegger, a Republican. "We must find a way to cut costs and relieve overcrowding but without sacrificing public safety."

Steinberg said the bill under debate would save the financially strapped state some $524.5 million. Coupled with budget revisions made in July, the savings would total the entire $1.2 billion, he said.

But Steinberg said the measure also would reduce the ratio of parolees to parole officers to 45-to-1. Currently, one parole officer is responsible for about 70 parolees, many of whom commit new crimes and return to custody; the state has a 70 percent recidivism rate.

All About Arnold Schwarzenegger • California • Prisons