More troops may be needed to bolster Afghanistan

(CNN) -- Adm. Michael Mullen, the highest-ranking man in the U.S. military, said the situation in Afghanistan is getting worse, as fresh indications emerge that President Obama soon could be asked to commit more American troops. 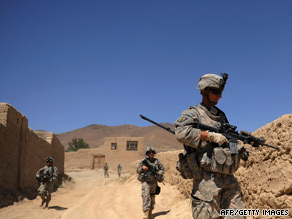 "I think it is serious and it is deteriorating. And I've said that over the last couple of years, that the Taliban insurgency has gotten better, more sophisticated. Their tactics, just in my recent visits out there and talking with our troops, certainly indicate that," Mullen, chairman of the Joint Chiefs of Staff, said Sunday on CNN's "State of the Union."

Obama has called the situation in Afghanistan a "war of necessity," and senior U.S. military officials said the latest military assessment shows that the Taliban exert "considerable influence" over a third of the country's landmass. But in the United States, support for the Afghanistan war is at an all-time low, according to CNN polling released this month.

Gen. Stanley McChrystal, the top U.S. general in Afghanistan, has been conducting an assessment of the progress of Obama's mission there. McChrystal is expected to present his review in the coming weeks.

Asked if the president is concerned there might not be enough troops on the ground, White House spokesman Bill Burton said that Obama laid out a "winning strategy" earlier this year and that the administration would wait for McChrystal's assessment and "make a decision accordingly."

The Pentagon has said no decision has been made regarding whether McChrystal will ask for more troops, but members of a congressional delegation who met with him said there's no doubt he will.

Sen. Susan Collins, R-Maine, said McChrystal presented the delegation with "his chilling assessment that the situation in Afghanistan 'is serious and deteriorating.' "

"A great deal of the discussion focuses on whether or not more troops are needed," she wrote on her blog. "It seems, however, pretty clear to me that he will be asking for more troops although he does not say that since he won't pre-empt his report to the president. I have enormous respect for Gen. McChrystal but remain troubled by the prospect of deploying more troops."

Sen. Bob Corker, R-Tennessee, who also was in Afghanistan during its elections last week, said there was much more concern about this vote than the one in 2004, a clear indication that things have gotten worse.

Corker said the troops needed to understand what victory in Afghanistan is. Corker: More troops may be needed

"We have to have security on the ground, that is true. But so much of what we do in Afghanistan is going to depend on the partners that we have there and some political reconciliation."

Sen. Joseph Lieberman, an independent from Connecticut, said he thinks Obama has been "strong and clear" in Afghanistan despite the domestic challenges he's facing.

But David Frum, an ex-speechwriter for former President George W. Bush, said the president has been verbally committed to Afghanistan but said "he has not put anything like the number of troops you need to succeed."

The United States invaded Afghanistan in 2001, following the September 11 attacks. There are about 62,000 U.S. troops on the ground, and NATO allies have another 35,000.

Democratic strategist Jamal Simmons said that while Americans are weary of war, they can't have unrealistic expectations for the president.

"Barack Obama has been president for ... eight months. You can't sort of lay all of this on Barack Obama's head. In fact, had George Bush not taken us into Iraq, we could have been much further ahead in this fight in Afghanistan than we are today. And so it's hard for us to have this conversation without really looking at the totality of the history. We didn't just show up here," Simmons said.

All About Afghanistan War • Barack Obama