(CNN) -- As President Obama struggles to regain control of the health care debate, he's finding himself caught in a game of tug of war with members of his own party. 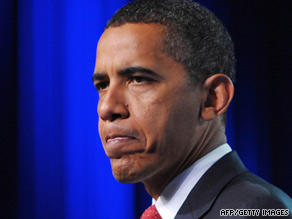 President Obama finds himself squeezed by party liberals and Blue Dog Democrats in the debate on health care.

The conservative Blue Dog Democrats don't want a bill with a government-sponsored, public health plan, and liberal Democrats have said they won't pass legislation without one.

Despite strong majorities in both chambers of Congress, Democrats have been unable to reach an agreement on the legislation. And the administration has acknowledged that it will be difficult to pass a bill with bipartisan support.

"The White House needs to take more of a role in trying to broker a deal between the Blue Dogs and party liberals -- in bringing them together and trying to figure some compromise," said Stu Rothenberg, a political analyst and editor of the nonpartisan Rothenberg Political Report.

"It's like a coach who took a ball, threw it in the middle of the court and said, 'OK, go get it.' And everybody runs there, and they have a huge scrum, and there's not a lot of progress," Rothenberg added.

"I think he needs to be more hands-on. ... Why not start with areas of consensus among all Democrats and then try to move out from there?"

The president has spent the past week trying to put out fires sparked after his administration appeared to hedge on support for the public option. At a town hall event last weekend, Obama said, "The public option, whether we have it or we don't have it, is not the entirety of health care reform."

Watch as the president takes calls on health care »

Critics said the president was waffling on his original proposals. The White House insisted its stance has not changed and sent talking points to congressional Democrats trying to ease concern about the public option.

Obama again on Thursday tried to reassure supporters he hadn't abandoned the idea, saying the administration thinks that "if we have a public option in there, that can help keep insurers honest, it can provide a benchmark for what an affordable basic plan should look like."

"This is sort of like the belt and suspenders concept to keep up your pants. You know, the insurance reforms are the belt. The public option can be the suspenders," the president added.

But House Speaker Nancy Pelosi sent a clear message Thursday that she's a lot less flexible on the idea. "There is no way I can pass a bill in the House of Representatives without a public option," she told an audience in her home district in San Francisco, California.

Three House panels as well as the Senate Committee on Health, Education, Labor and Pensions have cleared a government-sponsored health insurance option.

But a bipartisan group of six negotiators on the Senate Finance Committee -- the last panel that needs to clear health care legislation before it can be taken up on the Senate floor -- is considering dropping a government-funded public option in favor of nonprofit cooperatives that would negotiate collective policies for members.

If their party can't get the 60 votes needed for the bill to reach the Senate floor, some top Democrats have hinted they may try to short-circuit the traditional legislative process by using an obscure tactic known as reconciliation. It's a type of budget maneuver that requires a simple majority -- 51 votes -- to pass. Such a move would boost the prospects for Senate passage of a public health option.

In the House, however, Obama will need support from some of the more conservative members of his party. Democrats hold a 40-seat majority in that chamber, but more than 50 Democratic representatives are members of the Blue Dog Coalition.

Obama said Thursday that reform is a matter of necessity -- and not politics.

Larry Sabato, director of the University of Virginia's Center for Politics, said he laughs anytime he hears a president say it's not about politics.

"Let's get real here, their jobs are on the line. We would do the same thing if our jobs were on the line. It's just human nature," said Sabato, author of "The Year of Obama: How Barack Obama Won the White House."

Following the emotionally charged August recess, Obama will have to let Congress "fulminate for a while on both ends," Sabato said.

"They have to let the dust settle and then come back in September and begin serious negotiations with the two Democratic wings. And they have a very simple message: If you do to the Obama administration what your predecessors did to the Clinton administration, we will have a rout in 2010," he said.

"Some of you, many of you will lose your seats. That's the message, and that's how they get some health care reform. It's obviously not going to be what Obama wanted. It's going to be significantly scaled back, but they need something."

Following the defeat of President Clinton's health care effort in 1994, Democrats lost control of Congress for the first time in 40 years. It took 12 years to get it back.

Rothenberg predicted that Congress will pass some sort of legislation this time around, but said, "I just don't think it's going to be nearly as elaborate, all-encompassing as the liberal elements have been hoping for."

And while there still is some political risk in passing legislation with no Republican support, "I think the risk of not passing anything is so much greater than the risk of passing something in a more partisan way, that it's not even close," he said, adding that not passing a bill "is an invitation to a political disaster."