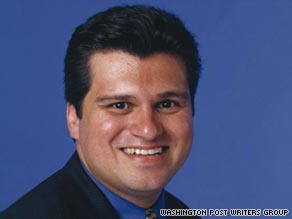 In a memorable line from the 1967 film, a prison warden surmises: "What we've got here is ... failure to communicate."

You can have the most popular cause, the best intentions, and the strongest ideas. But if you can't share with the rest of us exactly what you want to do and don't want to do, your agenda will wind up in intensive care.

In the latest sign of trouble, Democratic leaders in Congress are now working on a legislative strategy to get the most controversial parts of health care reform through both the House and Senate without Republican votes.

Brilliant. You know who'd really love that idea? Republicans. They see Obama-care as toxic with voters, and they don't want their fingerprints on it. Republicans would like nothing better than to have Democrats go it alone.

But who cares what Republicans want? The Obama-adoring media is all-to-eager to blame the current stalemate on Republican opposition. Whatever. The GOP's paltry share of congressional seats makes it irrelevant to this debate and, probably, to most others.

Obama's problem is his own party. The president is learning that herding donkeys is like herding cats, and that the extremes -- on the far right and far left -- can't be reasoned with. If he tries to please the conservative blue dogs, he loses the liberal yellow dogs. And vice versa.

All the more reason that the Obama administration has to speak clearly and with one voice. It's both sad and ironic that an administration that in its first 100 days had a tight grip on the script and kept everyone on message can't seem to keep its health care reform narrative straight from day to day.

The sticking point is the so-called public option which would provide a government-funded alternative to private health insurance. That scares the daylights out of a lot of people who don't have a lot of confidence in government efficiency and who worry that private companies can't compete with Uncle Sam so employees will be pushed by their employers into the public option whether they want to go there or not.

So what does President Obama do? He makes matters worse. He tries to argue that private companies can in fact compete with the government, and he winds up needing a special operation to remove his foot from his mouth.

"I mean, if you think about it," Obama told a town hall audience, "UPS and FedEx are doing just fine, right? No, they are. It's the Post Office that's always having problems."

Nice, Mr. President. This year, don't expect to get your Christmas cards delivered before Easter. In trying to address the concern about competition, Obama wound up feeding the concern that going from private to public will automatically mean a decrease in the quality of service. iReport.com: "Centrist" Obama is "M.I.A."

Worse, the administration is afflicted with a near debilitating case of the flip-flops. In an attempt to placate the blue dogs, who are increasingly squeamish about supporting anything that could undermine private insurance, Obama said Saturday that the "public option, whether we have it or we don't have it, is not the entirety of health care reform." The next day, in a television interview, Health and Human Services Secretary Kathleen Sebelius said a public option is "not an essential element" of overhauling the health care system.

Those comments, which were interpreted by most pundits and political observers as the administration backing away from support for a public option, sent the far left into cardiac arrest. So they turned up the heat. The head of a powerful labor union even put Democrats on notice that it would be, in future elections, open season on anyone who supported a health care reform plan that doesn't include a public option. Was that a threat? To quote you-know-who: "You betcha!"

So the administration flipped again. Earlier this week, Sebelius insisted that she didn't really say what she said and that "we continue to support the public option." White House Press Secretary Robert Gibbs also tried to triage the situation by saying that Obama and Sebelius still think a public option is the way to keep costs in check but that they are open to other ideas. Glad they cleared that up.

Does anyone have something for a headache?