White House may push through health care without Republicans

WASHINGTON (CNN) -- The Obama administration is looking hard at pushing through a health care reform bill without Republican backing, top Democrats close to the White House have told CNN. 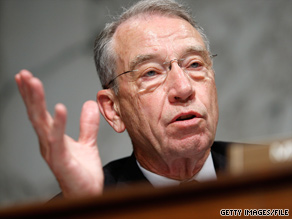 The Democratic majority in the Senate has been stymied in the health care debate by Republicans and conservative Democrats, leaving it short of the 60-vote "filibuster-proof" margin needed to pass the bill.

Democratic success could depend on an obscure tactic called reconciliation, a type of budget maneuver that requires only a simple majority -- 51 votes -- to pass.

Congressional Democrats authorized the maneuver specifically for health care reform legislation during the debate over the 2010 budget, which passed in April.

Watch an explanation of the tactic »

One top Senate Republican warned at the time that using reconciliation to pass such a measure would be "like a declaration of war."

Going it alone could be risky for Democrats, not because they couldn't raise the votes, but because Republicans could cast it as a power play and accuse them of failing to win bipartisan support. A Quinnipiac University survey released two weeks ago showed that 59 percent of registered voters nationwide oppose passage of health care legislation if the bill fails to win bipartisan support.

White House press secretary Robert Gibbs insisted Wednesday that President Obama has not yet given up hope for a bipartisan plan.

"The president has said countless times he will work with anybody and everybody who wants to work constructively on health care reform," Gibbs said.

"We continue to be hopeful that we can get bipartisan support, and we'll continue to work with those that are interested in doing that."

Watch a report on how Republicans may feel about the tactic »

But moving ahead on a more partisan basis might ultimately be a strategy Democrats are willing to employ.

"If we have to push it through this way, no one is going to remember how messy it was," a top White House adviser told CNN. "At the end of the day, they'll remember we got health care reform done. A win is a win."

White House officials are beginning to lay the groundwork for such a move, telling CNN that they'll have to take drastic measures if there's no movement.

Sources from the administration and the Democratic side of Capitol Hill have told CNN that they're becoming increasingly convinced that Republicans -- particularly Iowa Sen. Charles Grassley -- involved in the negotiating process aren't serious about striking a deal.

Grassley is one of six members of the Senate Finance Committee -- three Democrats and three Republicans -- negotiating the only bipartisan health care legislation so far.

The six negotiators are not considering a government-funded public health insurance option favored by Obama and Democratic leaders, but are instead looking at nonprofit cooperatives that would negotiate collective polices for members.

Grassley warned at a weekend town hall meeting that the months of negotiations may fail to produce a bill he can support.

Asked for a response to the Democrats' claims Wednesday, Grassley told CNN, "I've said all year that something as big and important as health care legislation should have broad-based support. So far, no one has developed that kind of support, either in Congress or at the White House. That doesn't mean we should quit. It means we should keep working until we can put something together that gets that widespread support."

Gibbs appeared to back Grassley, telling reporters that there are "Republicans on the Finance Committee and others that we believe are working in a constructive way to get reform through the Senate and ultimately to [the president's] desk."

Senate Finance Committee Chairman Max Baucus, D-Montana, also insisted in a statement Wednesday that "bipartisan progress continues. The [committee] is on track to reach a bipartisan agreement on comprehensive health care reform that can pass the Senate."

Jim Manley, a spokesman for Senate Majority Leader Harry Reid, D-Nevada, struck a more partisan tone, warning that while a decision to pursue reconciliation on health care has not been made, the Democrats' "patience is not unlimited, and we are determined to get something done this year by any legislative means necessary."

If Democrats choose to go it alone, the public health insurance option is likely to be back on the table, because there would be no need to win the votes of Republicans or conservative Democrats. But it would be a change in tactics after the White House appeared to shift its stance on the issue over the weekend.

Then on Sunday, Health and Human Services Secretary Kathleen Sebelius said that a public option is "not an essential element" of overhauling the health care system.

"Here's the bottom line: Absolutely nothing has changed," she said at a Medicare conference. "We continue to support the public option. That will help lower costs, give American consumers more choice and keep private insurers honest. If people have other ideas about how to accomplish these goals, we'll look at those, too. But the public option is a very good way to do this."

Earlier, Gibbs said that Obama and Sebelius have consistently called for making health insurance affordable to all in a competitive market, and that they think a public option is the best way to do so, but were open to other ideas.

CNN's Ed Henry and Dana Bash contributed to this report.