(CNN) -- Some of the strongest support for health care cooperatives' place in the national effort to reform the nation's health care system comes from those who experience a co-op's care every day: doctors and patients. 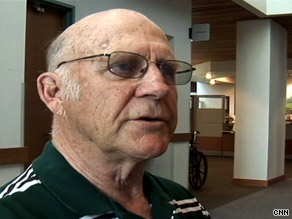 Co-op patient Norman Nistler says he didn't even realize he was a part of a health care co-op.

Co-ops are non-profit organizations, so any money that is earned goes back to be used on patients and other costs. Patients also elect a governing board, which is in stark contrast to operations under private health insurance plan.

Proponents point to two co-ops as evidence they are an alternative in the health care reform debate: HealthPartners in Minneapolis, Minnesota, and Group Health Cooperative in Seattle, Washington.

HealthPartners has been in business for half a century and served more than a million people in Minnesota and Wisconsin. Some decades-long members said they didn't know they were with a co-op.

"I watch a lot of it on television now. There's a lot of talking about co-ops, but I didn't realize this was a co-op," said patient Norman Nistler.

The co-op was able to save millions, officials note, by switching to generic drugs and cutting tobacco use among its members by double the Minnesota state average because doctors help patients to quit.

Darla Andrews, a patient at the co-op, said she and her doctor have easy access to her records. "It's all digital, so it works out good for me. It's more convenient."

"We can communicate with patients through secure e-mail for routine questions or concerns that in the private world physicians often aren't able or won't do because there's just no motivation to do that. There's no reimbursement. ... Here with Group Health's model, it's all about providing patients the care that they need when they need it in a form that works best for them."

Group Health lists Microsoft and Starbucks as organizations that use its system.

"I have great contact with the doctors," said Group Health member Dave Jacobs. "I'm treated like a person, not a number."

"My care has been absolutely exceptional. And that's because I believe I'm going to a private medical facility, dealing with doctors one-on-one and not a bureaucrat," he said.

"Part of the great value in that structure is that our patients are actively engaged, not just in the organization and governance but actively engaged in finding ways to engage themselves in their care itself," said Scott Armstrong, president and CEO of Group Health Cooperative. "We all know that an engaged patient leads to a better health outcome. So much of health care is actually the responsibility of us as individuals."

Aaron Katz, of the University of Washington Health Services, says the group health model could be viable nationally, but only if there are tougher restrictions on insurance companies. The reason co-ops are successful, he says, is because they employ their own doctors, specialists, pharmacies and can reduce the amount of tests and procedures that drive up costs.

Seaver says his co-op emphasizes evidence-based medicine and making decisions in patient care based upon "the best evidence that we have available for what's effective and what is ineffective."

"I think what we're finding in this model is doing the right thing for the patient is the best thing not just for the patient but also for the system as a whole," he said.

"I feel like I'm able to practice medicine the way I had envisioned back in medical school."

Working at Group Health "has been a breath of fresh air for my career," he said.