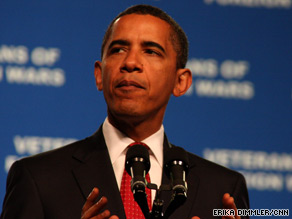 More money will be spent to treat and screen war veterans for post-traumatic stress and brain injuries, Obama says.

Obama, speaking to the Veterans of Foreign Wars convention in Phoenix, said his government will always honor military service and never abandon what he called true American heroes.

"So, caring for those affected by them is a defining purpose of my budget -- billions of dollars more for treatment and mental-health screening to reach our troops on the front lines and more mobile and rural clinics to reach veterans back home," Obama said. "We are not going to abandon these American heroes. We are going to do right by them."

The president also repeated he intends to have all U.S. combat brigades out of Iraq by the end of August 2010, and all other U.S. troops out of that country by the end of 2011.

The VFW and ladies auxiliary delegates applauded when he promised to eliminate wasteful Pentagon practices that he said squander billions of dollars that would better be used for supporting U.S. troops and veterans.

"This is not a Democratic issue or a Republican issue," Obama said. "It's about giving our troops the support that they need. And that's something that all Americans should be able to agree to."

The crowd laughed when Obama cited one example of needless spending -- for a presidential helicopter that he said would enable him to cook a meal when the nation was under nuclear attack.

"Now let me tell you something -- if the United States of America is under nuclear attack, the last thing on my mind will be whipping up a snack," he said.

Overall, Obama was intent on cementing his support from a key voting demographic that generally tends to back conservative candidates.

In a thinly veiled dig at the previous administration, he complained that U.S. forces were being used for far more tasks than fighting wars.

While pledging to never hesitate "to use force to protect the American people or our vital interests," Obama also said any decision to deploy U.S. forces would be based on strategic necessity and "good intelligence."

"And I will give you a clear mission, defined goals and the equipment and support you need to get the job done," he said to applause.

The Obama administration has committed more resources and troops to Afghanistan to battle the insurgency and train Afghan security forces, while also sending additional diplomats and civilian aid workers to focus on reconstruction and development. Obama noted the mission includes providing security for this week's presidential election there.

Gen. Stanley McChrystal, the top U.S. commander in Afghanistan, told The Wall Street Journal that he is still considering a request to send 10,000 more troops to Afghanistan in addition to the planned 68,000 troops who are expected to be in place by the end of the year.

Obama made no mention of any troop levels for Afghanistan in his speech.

His appearance before the VFW wrapped up his four-day swing through the West. The president has spent the past few days traveling through Montana and Colorado, where he held a series of town hall meetings to promote health care reform, his top domestic priority.

He raised the health care issue in his speech to war veterans, pledging that their medical benefits would be untouched in any overhaul of the nation's health care system.

"No one is going to take away your benefits. That is the plain and simple truth," Obama said in reference to what he called misinformation on the issue.

CNN's Ivan Watson and Ed Henry contributed to this report.

All About Veterans of Foreign Wars of the U.S. • Iraq War • Afghanistan War