WASHINGTON (CNN) -- President Richard M. Nixon and his Brazilian counterpart, Emilio Medici, in 1971 discussed ways their countries could work together to overthrow the socialist government of Salvador Allende in Chile, according to a newly declassified document. 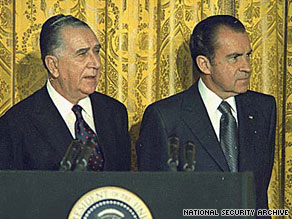 During a meeting of the two leaders at the White House on December 9 of that year, Medici was discussing the possibility of a coup by the Chilean military with assistance from Brazilian military officers when Nixon said that it was "very important that Brazil and the United States work closely in this field," according to the document.

Nixon offered money or other discreet aid for the effort if it could be made available, the document shows.

"We must try and prevent new Allendes and Castros, and try where possible to reverse these trends," Nixon said. Medici said he was "happy to see that the Brazilian and American positions and views" were so close.

The memorandum, along with other documents, were declassified in July as part of the State Department's Foreign Relations of the United States series.

"This is an explosive document that details collusion between the colossus of the North [the United States] and the colossus of the South [Brazil]," said Peter Kornbluh, the director of a Chile and Brazil Documentation Project for the National Security Archive. He called it "a smoking gun of confirmation of Brazil's effort to engage in operations to overthrow the government of Chile and a discussion of collusion with the United States."

The two leaders also discussed the creation of a back channel for direct communication outside normal diplomatic protocols, according to the document. Each designated personal aides to carry handwritten communications back and forth to keep discussions out of official records.

"I think there is precedent, but we've never seen it detailed in a document this way, in which two presidents set up the utmost secret of back-channel communications so they can discuss the most sensitive aspects of collusion and collaboration in efforts to challenge the left in Latin America and change the futures of select Latin American governments," Kornbluh said.

He added that "there's a significant paper trail of evidence of what that collusion was that remains secret, and we're going to have to press Brazil and Washington to recover those documents."

Despite the leaders' effort to keep the subject of their talks secret, word got out.

A declassified CIA memorandum written some time after the Nixon-Medici meeting in Washington said that word of the secret talks between the two leaders about shaping Brazilian foreign policy filtered down to Brazilian military officers by a "Cabinet leak." Gen. Vicente Dale Coutinho, commander of Brazil's 4th Army, reacted to this by saying that the United States obviously wanted Brazil "to do the dirty work," it said.

A declassified CIA national intelligence estimate written in 1972 concluded, "Brazil will be playing a bigger role in hemispheric affairs and seeking to fill whatever vacuum the U.S. leaves behind. It is unlikely that Brazil will intervene openly in its neighbors' internal affairs, but the regime will not be above using the threat of intervention or tools of diplomacy and covert action to oppose leftist regimes, to keep friendly governments in office, or to help place them there."

The newly published documents do not offer any conclusive proof of Brazilian involvement in the Chilean coup of 1973, which the Nixon administration supported.

Kornbluh said that with the passage of time and change in governments in all of the countries involved, the real story of diplomatic and covert collusion between the United States and Brazil in Chile can finally be told.

The National Security Archive will push for the declassification and publication of more top-secret documents from the Nixon library, he said, and will approach Brazilian government officials to ask for their cooperation in getting documents released in Washington and Brasilia, the capital of Brazil.

Kornbluh said he also hopes that surviving Chilean government and military officers from the era who knew of any arrangements with the Brazilian government will come forward and tell their stories.

"This is history for history's sake, but history will not find closure until it's fully aired," he said.

All About Richard Nixon • Brazil • Chile