(CNN) -- From Yellowstone National Park to the Everglades, America's 391 national parks are in need of repair -- and thanks to the economic stimulus signed into law, help is now underway. 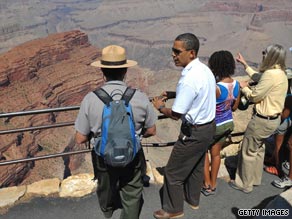 President Obama and his family visit the Grand Canyon in Arizona, a national park.

But not all of the stimulus money is being used -- and the parks are facing a $9 billion backlog in maintenance projects. So far, nearly 10 percent is in the pipeline.

"We are picking away at it as much as we can and we've been fortunate to have the recovery act money," said Jeffrey Olson of the National Park Service.

Olson said half of the $9 billion is slated to go for road repairs.

"Half of that [$9 billion] is roads and about $2 billion of that are the most pressing needs -- those we get some help from the stimulus. The president's budget proposal is calling for more maintenance and construction money," Olsen said.

Dan Wenk, the acting director of the National Park Service says most of those pressing needs include, "camp grounds, camp sites, it's amphitheaters for evening programs. It's the bathrooms. It's literally everything we have to make our visits enjoyable."

And those needs, Ranger Rocky Schroeder hopes, will be fulfilled soon.

Schroeder patrols Prince William Park, about 35 miles outside the nation's capital. It has more than a dozen historic cabins slated for repair and is just one of the 250 national parks getting a face lift because of the stimulus package.

"The stimulus will help keep our visitors here, keep them happy and keep them coming back," Schroeder added.

And the numbers are good for national parks.

As of the end of July, attendance at the parks is up roughly 3 percent from the same time last year, according to the parks service. In 2008, nearly 275 million people visited the national parks compared to 272 million in 2006.

At Prince William Forest park, officials are hoping to start putting the money to use next month -- and said they've had overwhelming interest. For these stimulus projects, they need to hire six additional people. So far, they've received nearly 200 applications.

The Interior Department estimates the stimulus allocation will create around 8,000 jobs over two years -- though many will be temporary.

Some Republicans, however, are skeptical.

"Clearly we need to improve our national parks ... but nobody should confuse that with economic stimulus. I mean frankly that's just false advertising," Rep. Jeb Hensarlin, R-Texas, says.

For Ron Tipton of the National Parks Conservation Association, the funding is vital.

"We must ensure our national parks are well funded to address the parks' crumbling historic buildings and trails, enhance the Park Service's ability to protect wildlife, and provide needed public education and services," he said on the association's Web site.

Olson believes that when economic times are tough -- especially during the current recession -- parks are an economically friendly alternative to more expensive getaways.

"We rise above other things like theme parks," he says. "When times are tough economically, people turn inward and ask some really basic questions and there is nothing like being in a national park to ask those questions."

But when it comes to this money, the key question being asked: How is the stimulus money being used?

Nearly $56 million is for Washington landmarks, which some say are in dire need of repair. More than $14.5 million is going to Mesa Verde National Park and nearly $11 million has been allocated for the Grand Canyon.

Schroeder said he is confident the infusion of stimulus dollars is a worthwhile investment.

"The national parks are our past, our history."