WASHINGTON (CNN) -- Kenneth Bacon, a former reporter and Pentagon spokesman who later served as a top advocate of displaced people all over the world, died Saturday, according to Refugees International. He was 64. 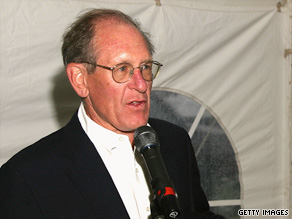 Kenneth Bacon was "one of the great voices in humanitarian advocacy," says Joel Charny of Refugees International.

Bacon had served as the president of Washington-based Refugees International since 2001, the group said in a statement Saturday. The former Wall Street Journal reporter died Saturday morning from an aggressive melanoma that spread to his brain, the statement said.

Secretary of State Hillary Clinton called Bacon, who was Pentagon spokesman during the Clinton administration, a "great humanitarian leader."

"Most Americans remember Ken as the unflappable civilian voice of the Department of Defense, where he served with distinction as spokesperson for many years," Clinton said in a statement. "But for millions of the world's most vulnerable people -- refugees and other victims of conflict -- Ken was an invaluable source of hope, inspiration and support.

Refugees International credited Bacon for doubling the group's size under his leadership and helping it get increased protection and assistance for displaced people in Sudan's Darfur region, Iraq, Pakistan and other troubled areas. In the last months of his life, Bacon shifted his focus toward the issue of climate displacement, the group said.

"Ken would walk the corridors of power one day and then meet with refugees in the most remote areas of Darfur the next. His unique mixture of expertise in the media, military affairs, and U.S. government policy, added to his compassion for vulnerable refugees, made him one of the great voices in humanitarian advocacy," said Joel Charny, acting president of Refugees International. "Ken always saw the best in people. His ability to connect with nearly everyone he met made it possible for him to convince officials at the highest levels of government and the United Nations to make the necessary changes to save lives and protect people from harm."

In 1994, Bacon became the Defense Department's assistant secretary of public affairs and Pentagon spokesman. He was known for his no-nonsense manner and his signature bow ties.

"I first got to know Ken Bacon several years ago when he was the chief Pentagon spokesman. Ken did the job the way its supposed to be done: holding press conferences, answering questions, providing facts, information and context," said CNN Pentagon Correspondent Barbara Starr. "I know he was often bemused to watch the new era of spin and message, since he so passionately believed that facts stand on their own merit.

"Later, Ken became an extraordinary advocate for refugees and displaced persons around the world," she added. "I could ring him up to ask a question about any remote area of the world where people were suffering and he could explain with breadth and depth what was going on."

Before working at the Defense Department, Bacon for more than 25 years served as a reporter and editor at the Wall Street Journal, where his assignments included the covering the Pentagon, the newspaper reported.

"He came to the Journal in 1965 and scored a rare (for an intern) page-one story about an automated car-repair system that one overheated mechanic described as 'the greatest thing since girls,' " the newspaper said in a story posted on its Web site.

He is survived by his wife, Darcy, two daughters, two grandchildren, his brother and his father.

Refugees International said a memorial service would be held in September.

All About Refugees International • The Pentagon