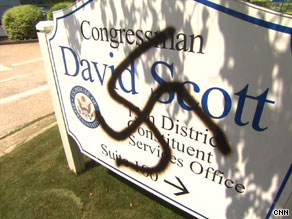 Rep. David Scott's staff found a swastika on a sign outside his district office in Georgia.

David Scott, a Democrat from north-central Georgia, told CNN he has received several offensive faxes and letters, including some with death threats and racial abuse.

Scott is black. His district includes part of metro Atlanta.

The congressman showed CNN a cartoon of Barack Obama, depicting the president as a clown with a swastika on his head, which Scott said he had received in the mail.

Tuesday, his staff found a swastika painted over Scott's name on a sign outside his office.

"I was just simply appalled," he said.

"This symbol represents the most heinous period in world history, indicative of man's greatest inhumanity to man, where nearly 6 million Jewish people and others were murdered purposely by Adolf Hitler," Scott said. "So when you reach that point ... this is very, very dangerous."

Local police and the F.B.I. are investigating.

Scott said he believes the swastika and hate mail are a result of the acrimonious health care debate.

Lawmakers holding public forums in their home districts during their August recess have been the target of some angry protests over the proposed health care overhaul. An argument Scott had with a doctor at a public meeting has been featured on both local TV and CNN.

The Georgia representative said he does not believe the vocal protests against Obama's proposed changes to the health care system are spontaneous.

"I think to a degree they're organized and orchestrated," Scott said.

"There's no question about that but they have a right to do it -- that's very, very important. This is America, it's rough and tumble, that's what we're here for, but this is something else," he said.

And he says Obama should call for an end to it.

"I think he really has to speak strongly ... before somebody gets hurt at one of these things."

CNN's T.J. Holmes in Atlanta, Georgia, contributed to this report.