(CNN) -- The question may have been lost in translation, but a visibly angry Secretary of State Hillary Clinton bluntly told a town-hall meeting in the Democratic Republic of Congo on Monday, "I will you tell you my opinion, I'm not going to channel my husband." 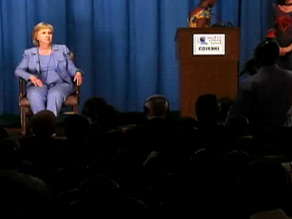 Hillary Clinton became visibly angry after a translator asked what Bill Clinton would think regarding an issue.

The unscripted moment happened as Clinton spoke to students at a Congolese university in Kinshasa, the Congo capital.

A male student rose to ask a question about Chinese financial contracts with Congo.

The student asked Clinton what President Obama would think of the deal, but pool reporters in the room said the translator made a mistake, posing the question as what would Bill Clinton think.

Clinton looked surprised when she first heard the translation in the headset, and then sharply replied, "You want me to tell you what my husband thinks? My husband is not the secretary of state, I am. You ask my opinion. I will tell you my opinion; I'm not going to channel my husband."

At the State Department, Assistant Secretary P.J. Crowley said the question she heard "struck a nerve," that her opinion on the matter was apparently of less interest than that of her husband, the former president.

Crowley told CNN that Clinton's answer must be considered in the context of her African trip.

"The secretary of state is going to Goma Tuesday, to draw attention to the plight of women who are victims of rape as a weapon of war" in Congo, Crowley said.

"She did react to what she heard," Crowley explained, but regardless that the interpreter may have gotten it wrong, "you can't separate the question from the setting."

He said "If Africa, if Congo is going to advance, women have to play a more significant role. She was in the setting of a town hall, and the questioner was interested in what two men thought, not the secretary of state."

Crowley, who has just returned to Washington after traveling with Clinton during the first part of her trip to Africa, said the State Department has not yet reviewed recordings of the original question, in French, to learn whether the student clearly intended the question to refer to Obama, not former President Clinton.

"She did talk with the student afterward, and they seemed to have reached an understanding," Crowley said.

All About Hillary Clinton • U.S. Department of State • Democratic Republic of the Congo